When I tell Kuni Tomita the anime classic ‘Akira’ turns 30 years old this month, she shakes her head and laughs.

The animator has a very personal connection to the movie: She was one of more than 60 key animators assembled to bring the massive project — at the time, the most expensive animated Japanese film ever — to life.

Tomita, who now works in the American animation industry and is based in Los Angeles, got her start at an early age. She went to high school at Joshibi, a famous art school in Tokyo, where one of her projects involved making a piece of animation.

“But,” she says, “our teachers were graphic designers. They didn’t actually know how to make animation.”

So Tomita and her classmates decided to visit an anime studio, Sunrise (best known for “Mobile Suit Gundam”), to learn how it was done from the pros.

“They said, ‘OK, sit down here!’ So I sat down at the animation desk and started drawing. That was the beginning of my career.”

She doesn’t mean it figuratively — the school trip to Sunrise had actually landed the 16-year-old Tomita a part-time job as an animator.

Her first four drawings — a face and some lip movements — took her two days and netted her a grand total of ¥400, but Tomita was hooked.

“I was a high school student, so even if it was ¥400, I was so happy to make money, and especially from drawings!”

Tomita’s first real job in the industry was penciling dōga, the filler frames that come between the crucial genga frames that detail the action. By the time she was in university, Tomita had moved onto drawing genga. She says she was “probably the only one” in the studio doing key framing at such a young age — and one of the only women.

Early in her career, Tomita worked on animation for series such as “La Seine no Hoshi,” “Brave Raideen” and “Candy Candy.” She then moved to Tokyo Movie Shinsha, also known as TMS, where she worked on both Japanese content such as “Lupin the Third” and “Cat’s Eye,” as well as shows TMS was producing for Disney, including “DuckTales” and “The Wuzzles.”

TMS was also — you guessed it — the main animation studio behind “Akira.” That put Tomita in the unique position of working on that ultraviolent, adult-oriented feature film at the same time she was doing “The New Adventures of Winnie the Pooh.”

“They wanted me to work solely on ‘Akira,’ but I told them I couldn’t do that, because you couldn’t make money on ‘Akira,'” she says with a laugh. “I couldn’t survive!”

“Akira” may have been a prestige project, but that didn’t necessarily mean much to animators financially. Key frame animators are paid by shot, or sequence, and the time involved in drawing the film’s incredibly detailed frames meant that “Akira” ultimately paid less than other projects.

Still, Tomita says, “lots of people devoted their life to that project.” For many of the animators charged with bringing the film’s setting of Neo-Tokyo to life, she explains, the chance to work with “Akira” director Katsuhiro Otomo — who she describes as “an artist” — was their primary motivation.

Tomita herself was responsible for the sequence in which main character Tetsuo has just escaped from the hospital, which appears around 26 minutes into the film. When she saw the finished film, including her sequence, Tomita says, “It looked great. I couldn’t believe the high quality of the animation. But,” she laughs, “I had no idea what was going on in the story at the end.”

The year after the completion of “Akira,” in 1989, Tomita made the rare step of moving across the Pacific to work in the animation industry in the U.S. Her motivation for the move, she explains, came from a lifelong interest in U.S. pop culture.

“I was a big fan of American comedies since I was little,” she says. “I watched ‘I Love Lucy,’ I watched ‘Combat’ … I was one of those kids who got brainwashed by American TV.”

In addition, her father was an architect who worked with foreign architects like Antonin Raymond, who helped design the U.S. Embassy, which got Tomita used to interacting with people from outside Japan and speaking English from a young age.

Arriving in the United States, Tomita worked at the American branch of TMS before moving on to Disney. Eventually, she became a director on the popular shows “Go, Diego, Go!” and “Dora the Explorer,” and is currently working on storyboards for a new Netflix animated series.

Do people in the American animation industry ever talk about “Akira”?

“Oh yeah, oh yeah. All the time,” she says. “Everybody is very complimentary, they say it has gorgeous animation, beautiful … and everybody says, ‘I don’t know what the ending was about!'”

Thirty years later, Tomita sums up her feelings about working on “Akira.”

“While I was working on it, it was a pain in the neck! But now I look back, and it was a very good experience. And it was very nice to have it on my resume, for sure,” she says. “The animation looks great. After 30 years, it still stands out, right? So I’m proud to have been a part of it.”

Reminiscing about the experiences causes Tomita to recall a specific memory from her time working on the film.

“We had finished up the ‘Akira’ production, and I was still at TMS,” she recalls. “One day, I saw this pile of scenes, cels, backgrounds, everything, and I found my own sequences. I asked, ‘Hey, what are you going to do with this pile?’ And they said, ‘Oh, we’re going to throw them away.’ (So I said) ‘Can I take some?’ ‘Sure, go ahead.’ So I took the sequence that I worked on. Of course, these days, if you find ‘Akira’ cels, they’re going to be worth an incredible amount of money!” 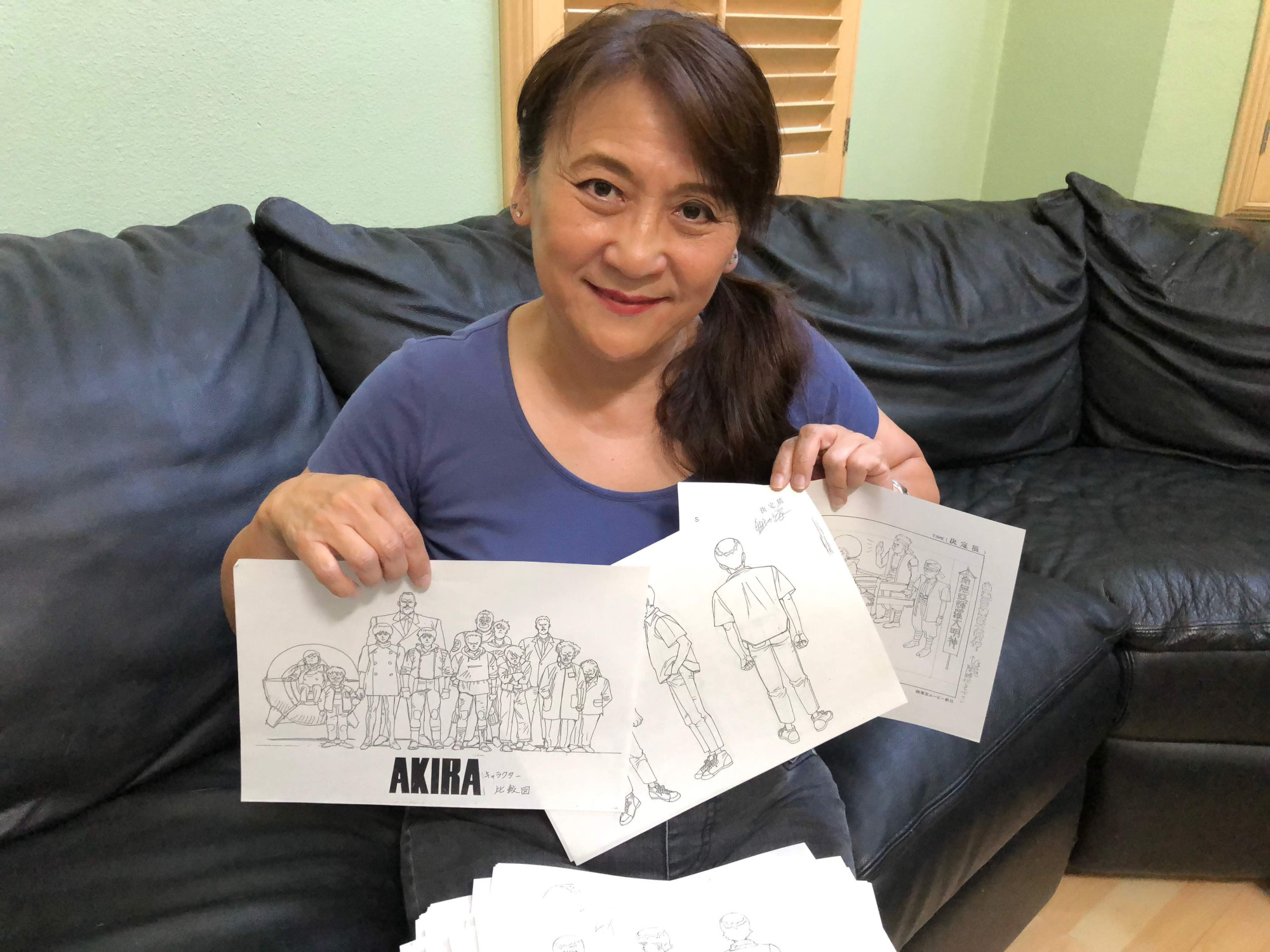 Sketching a classic: Kuni Tomita shows off model sheets created in 1988 for the original 'Akira' film by Katsuhiro Otomo.

Known for his dynamic action scenes and high detail (watch Kaneda spit out a tooth when he gets knocked down early in the film), Satoru Utsunomiya went on to work on Mamoru Oshii films such as “Ghost in the Shell 2: Innocence” and “Sky Crawlers.” He recently contributed to “Batman Ninja.”

Takashi Nakamura is credited as the film’s character designer as well as a key animator. Known for his perfectly lip-synched shots, he went on to direct the films “A Tree of Palme,” “Catnapped!” and, most recently, “Harmony.”

Toshiyuki Inoue animated the shocking scene near the beginning of the film when Tetsuo hits a member of the Clowns with a lead pipe. After “Akira,” he worked on director Katsuhiro Otomo’s “Steamboy” and several films with Satoshi Kon, including “Tokyo Godfathers” and “Paprika.”

Shinya Ohira created the realistic smoke in “Akira,” as well as the cloud movements in some other shots. He wound up working on several international co-productions, like “The Animatrix” and “Kill Bill,” as well as Studio Ghibli films such as “Howl’s Moving Castle” and “The Wind Rises.”