The hard-knock life of a stunt performer in Japan

The hard-knock life of a stunt performer in Japan

Yutaka Nozawa has a dream.

“I grew up watching Jackie Chan films, so every time I go to a shopping mall or another high building, I always look down and think how Jackie Chan would fall,” says the 28-year-old. “In the future, I want to fall from a three-story building, breaking through glass and roofs.”

Nozawa’s ambition may not be shared by everyone, but then again, not everyone is a professional stunt performer.

Nozawa is an instructor and student with Quiet Flame Productions, a Tokyo-based stunt school, film production company and taekwondo dojo set up in 2017 by American Chuck Johnson. The school makes most of its money from taekwondo but also has around 10 dedicated stunt students, who are training to do the highly skilled work that is just too risky and specialized for TV and movie actors.

This can include fights, falling down stairs, being set on fire, flying through the air, crashing cars and falling off buildings. Although meticulous planning and rigorous safety are at the heart of everything a stunt performer does, danger is never far away.

“The stunts all have varying degrees of difficulty and varying degrees of danger,” says Johnson. “Fight choreography is the one where you get bruised up the most, but it’s also the most nonlethal. If something goes wrong in fight choreography, at worst you get a broken nose. If something goes wrong when you’re doing a high fall, you’re probably not going to walk away from it.”

Johnson is a former U.S. national taekwondo champion from Michigan who moved to Japan in 2002. He did a variety of jobs, from English teacher to bodyguard, before landing a small part as a martial arts supersoldier in the 2004 movie “Godzilla: Final Wars,” where he met up-and-coming action director Yuji Shimomura.

An action director is the person who oversees action scenes in a movie, and will bring a team of trained performers to the production. Johnson asked Shimomura if he could join, and spent the next two years training to embark on his new career.

With virtually no other Western stunt performers working in Japan, Johnson knew there was an opening for him if he could complete his apprenticeship. As someone coming from a martial arts background, however, his movie fight training ran counter to everything he had ever learned.

“In real fighting, you never want to show somebody what you’re doing,” Johnson says. “In film, you always want to show it superclearly. One, so that you can cue to the person you’re doing the action sequence with. And two, so that the audience knows what’s happening. It’s a completely different style of movement, where the logic is backward.

“Fight choreography is a partner dance,” he says. “It’s never about you. It’s about you matching your timing with the other person.”

Johnson picked up work slowly at first but soon found himself in demand once his name became known in the industry. He was cast in several movies, TV shows, commercials and video games, before he decided to further his education by enrolling in the International Stunt School in Seattle in 2008.

There, he learned how to do “high-profile” stunts such as high falls and fire burns, and returned to Japan with more skills in his repertoire. Fight scenes constitute the bulk of a performer’s work, but the more spectacular stunts are far more lucrative. 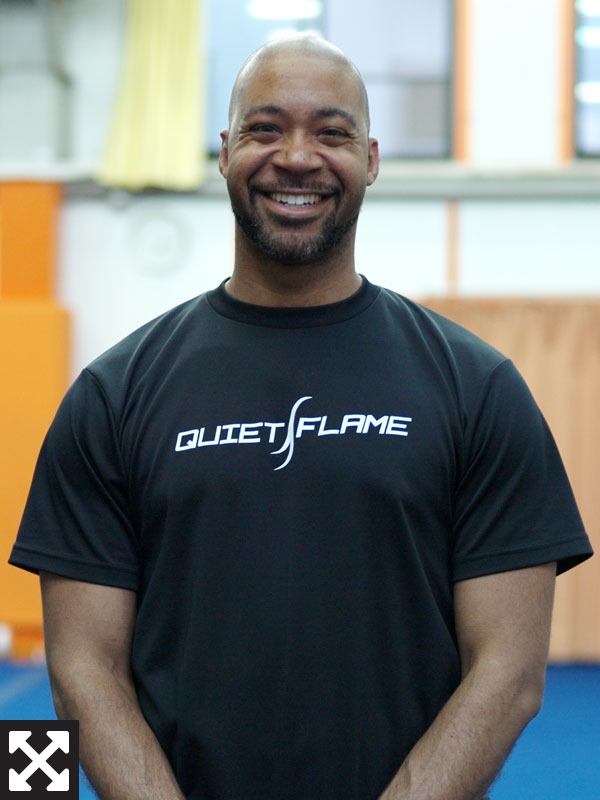 Chuck Johnson has worked as a stuntman in Japan for almost 15 years. RYUSEI TAKAHASHI

Fight choreography is a partner dance. It’s never about you. It’s about you matching your timing with the other person.”

“Stunts generally pay really well,” says Johnson. “Usually, because the risks are so high, a fire burn is worth thousands of dollars. A high fall you would get over a thousand dollars. Fight stunts, that’s just a part of the day job so you just get your regular rate. Unless you get hit, then you’ll get a bump in pay if the actor punches you in the face by accident. That’s in the States. In Japan, pay bumps don’t really happen. Your day rate is your day rate.”

Johnson says he has never been injured doing a stunt, which he puts down to careful decision-making. He says pain is “part of the job,” but he will refuse to do any stunt that he believes will lead to injury or that he feels incapable of doing.

Saying no can be detrimental to a stunt performer’s career, and Johnson makes sure to turn down offers ahead of filming and to recommend other people rather than commit the cardinal sin of refusing once he is on set.

The politics of the industry, however, can lead to undue pressure on performers.

Johnson now has his own team in the form of Quiet Flame, and his proteges have already found work in the industry. One member was hired to be Jared Leto’s stunt double in the 2018 movie “The Outsider,” while others have done motion capture, TV, commercial and movie work.

“We had a gig for a movie last year where they needed a bunch of mafia guys,” says 33-year-old American Brendan Stallings, a Quiet Flame student taking part in a fight choreography session at a gym in Tokyo’s Roppongi district. “We all went in and did a fight audition and they cast four or five of us.

“We had to run around and get shot,” he says. “It was really cool, because they gave me a gun and a phone and said, ‘Run down this hallway and take a bullet to the head,’ and I was like ‘OK.’ It’s a ridiculous thing to be asked to do, but it was really fun to be asked to do that.”

Johnson begins the class with a warm-up before leading the students in a series of punching drills. The person throwing the punch must do so with an exaggerated, sweeping motion, taking care not to obscure their face and sticking their chest out to express maximum commitment.

The person receiving the punch must wait until the fist is directly in front of their nose, then snap their head to the side and quickly back again. If the fist is not properly aligned or the timing is off, the punch will not “sell,” or be believable.

“Head snaps” are a skill in their own right. Johnson says that casting directors will sometimes hire performers on that basis alone, and the class is united in its appreciation of Nozawa’s efforts, which are delivered with a dramatic swish of his glossy hair.

After the drills, Johnson splits the class into groups of three and choreographs a short fight for each group to rehearse and perform on camera at the end of the session. Each fight contains a sequence of punches, kicks and blocks, meaning any mistakes or lapses in concentration will result in one of the blows connecting for real.

Johnson insists that this has never happened in his classes so far, but on this occasion it does. Aver Hamilton, a 36-year-old entertainer from New York, throws an over-exuberant punch that Stallings is not quick enough to duck, and Hamilton spends the rest of the session apologizing as Stallings rubs his jaw and tells him not to worry about it.

“I particularly don’t like hitting my friends in the face, so I got kind of shook up a little bit,” a guilt-stricken Hamilton says afterward. “But I think it gets easier to overcome because you really want to make it sell. It’s part of the game.”

Later that week, Johnson and his team reconvene for a wire action and high seminar at Studio BOS in Tokyo’s Itabashi Ward. Studio BOS is a dedicated stunt and features a vertigo-inducing range of platforms to jump from, ropes to hook up to and crash mats to plummet onto.

Johnson is teaching his students how to “fly,” using a rope and harness to create the illusion that the performer is jumping higher than humanly possible or being hurled through the air by a powerful force. The motion is controlled not by a machine, but by team members working together to pull the rope.

After the wire action session has finished, Johnson takes the class through a series of falls from a 1.5-meter platform onto a crash mat. These include the “sit fall,” the “face-off” and the “header,” all of which must end with the performer landing flat on the back to ensure one’s weight is distributed evenly across the mat.

As with the wire work, having the right physical form and posture are important. But stunt performers are first and foremost actors, and it is the subtle details — like making sure the arms and legs flail in wide enough circles while falling — that make all the difference.

“When I was in the air, I forgot the little things like kicking my legs and doing my facial expressions as well,” says Alice Iwamoto, a 27-year-old actor who has been training with Johnson and his team for the past year. “I was concentrating on getting the posture. Doing expression and trying to get all the movements is definitely hard.”

Many of Johnson’s students say they attend his classes because they want to expand their repertoire. Unlike in the U.S., where stunt performers generally stick to a particular area of expertise, such as high falls or fire burns, in they are expected to do a bit of everything.

Johnson himself takes more of a back seat nowadays, focusing on producing movies and training students both in Japan and at the International Stunt School in Seattle. He still acts occasionally, and last year appeared as the main character in “We Are War,” a movie filmed in the Philippines.

He also acknowledges that the physical nature of stunt work means “there is definitely a time limit” to one’s career. His most painful and grueling stunt involved being yanked backward through the air and landing on a concrete floor on his back — a feat he had to perform about 10 or 12 times. The stunt appeared in the finished commercial for about three seconds.

For all the hardship, however, there is no other industry he would rather be a part of.

“I also think it’s cool because it’s artistic and creative but it’s physical,” he says. “There’s an aesthetic involved but it’s very, very physical. It really is acting. In Hollywood, they’re called stunt actors because you act. But it’s the most physical you can imagine.”