Iconic seasonal ornaments reflect the fashions of ages past

On a chilly night in late November, Seizo Hashimoto, 65, was stood beside his stall at Otori Shrine in Asakusa, Tokyo, selling ornamental bamboo rakes that are believed to “catch and rake in” wealth and good luck in the coming year.

His family’s income depends solely on selling the rakes at shrines in the Kanto region during the winter period between November and January. The rest of the year is devoted to making the rakes, which are called kumade in Japanese. Among 100 rake-makers that operate today, his Tokyo-based company is one of only 20 family-run firms that make their living only through the rake business.

Hashimoto, who inherited the rake-making firm launched more than 100 years ago by his grandfather, said he was mostly content with his life as a third-generation rake-maker. The business has been stable for the past 40 years, even after the collapse of the bubble economy in the 1990s, he said.

But like in many other industries, the nation’s rapidly graying and shrinking population is casting a shadow.

The average age of craftsmen is advancing and many have shuttered their business because of a lack of successors, he said. Hashimoto is no exception, and he is struggling to find someone to whom he can pass on the firm before his retirement.

“My son is a sushi chef and I don’t think he would be interested in taking over this business, given that he has already built up his career,” Hashimoto said. The repetitive nature of his work — making rakes for nine months and selling them during winter — may look boring for young people, he said. But for Hashimoto, the work has been a joy as it has helped him to “understand the history, trends and economy of Japan,” he said. 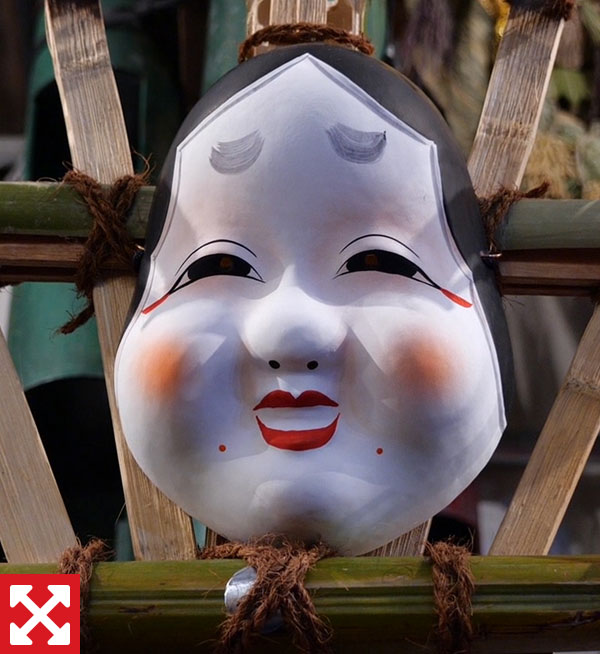 A rake featuring an okame (a mask with the appearance of a round-faced woman) from the Edo Period is displayed at a Shinichi Kawabata's stall at the Otori Shrine in Asakusa on Nov. 25. CHISATO TANAKA

Seizo Hashimoto, 66, and his family at his stall near Hikawa Shrine in Omiya, Saitama Prefecture, on Dec. 10. CHISATO TANAKA

The origins of ornamental rakes are intertwined with the Tori-no-ichi (rooster market) festival held at shrines on days in November that are designated as “rooster days” on the traditional lunar calendar.

The festival is said to have originated at Hanahata Otori Shrine in Adachi Ward, Tokyo, as early as the 1730s, according to a book titled “Tori-no-ichi to Kumade” (“Tori-no-ichi and Kumade”) penned by Mitsuo Matsuzawa.

It originally was a market where farmers sold winter vegetables along with handmade bamboo rakes and brooms that people bought for ordinary use.

But with changes in trends and fashions during the Edo Period (1603-1868), the bamboo rakes began to be sold more as ornaments adorned with okame (masks with the appearance of a round-faced woman). Samurai warriors and businessmen also started purchasing them as good luck charms because the shape of the rake blades looked similar to the claws of an eagle.

Different lucky items were added to decorate the rakes — such as straw festoons, cash boxes and red-snapper-shaped paper — that were said to bring good fortune.

During the Sino-Japanese War of 1894 to 1895, eagle ornaments were added to symbolize the power and courage of Japan. That practice, however, faded in 1902, when Japan’s relationships with Russia deteriorated. The Russian imperial symbol was the double-headed eagle. Two years later, when the Russo-Japanese War erupted in 1904, rakes were decorated with Japan’s Rising Sun flags.

Hashimoto said what he likes most about the rakes is the development and changes in the ornamental designs.

Today, most kumade are adorned with colorful traditional ornaments, but some, like rake craftsman Shinichi Kawabata, have kept their design simple, like those sold in the Edo Period with only a few ornaments.

“I keep my rakes simple so that people will know what authentic rakes look like,” said Kawabata, who is a good friend of Hashimoto.

Today, most kumade are adorned with colorful traditional ornaments, but some, like rake craftsman Shinichi Kawabata, have kept their design simple, like those sold in the Edo Period with only a few ornaments.

Both Kawabata and Hashimoto said the most important thing in the rake business is building relationships with their customers.

“Many of my customers have been buying our rakes for more than 20 years,” Hashimoto said. “Usually their former presidents started buying my rakes, and it became their custom to buy new rakes from the same shop.”

The sizes of the rakes ranges from about that of a cup, priced at around ¥1,000, to two-meter-tall models that are said to cost more than ¥300,000. Customers usually upgrade the size of the kumade they buy every year, because this is believed to bring in even more fortune and good luck. But some prefer them small.

Yuichi Hosonuma, 58, who has been buying Hashimoto’s rakes since he started his own company 28 years ago, said he purchased a smaller decorative rake than the one he bought last year.

“I closed down my business this year, and to mark the beginning of a new chapter in my life we’ve decided to restart with a small one,” said Hosonuma, who came to buy one together with his wife in Omiya, Saitama Prefecture, in early December.

Customer Atsuko Mori, 54, who came all the way from Yamagata Prefecture to buy one of Hashimoto’s rakes, said she started buying rakes last year to bring success to her restaurant business.

Asked why she chose Hashimoto’s rakes from among the 20 different stalls at the shrine, she said, “Hashimoto’s grandmother was so kind to me, so I bought one here.”

Although this year’s Tori-no-ichi festival is now over, there is no time to rest for Hashimoto and his family as they also sell rakes at another market called kumade-ichi (kumade market).

“Our sales will end in January, and from February we will start making them again,” Hashimoto said.

Many of my customers have been buying our rakes for more than 20 years. Usually their former presidents started buying my rakes, and it became their custom to buy new rakes from the same shop.”