Sixty-three-year-old Kiyoshi Ikehara mops his bald head with a towel, wipes his hands and grips the vertical pole.

With a sharp intake of breath he hauls himself up, grunting and straining as he climbs to the top. Once there he stops, clamps his thighs shut and quietly composes himself.

Then, as the rest of the class watches, he releases his hands and slowly lowers himself backward until he is completely upside-down. He stays there for several seconds, holding the pose with uncommon strength and grace.

It’s fair to say that the image of pole dancing has changed quite a bit in recent years.

“I started around three months ago,” Ikehara says, after an hour’s workout on a Friday night earlier this month in a beginners’ class at Pole Dance Studio Transform in Tokyo’s Shibuya Ward. “I used to do yoga to keep in shape. I started doing this for the sake of my body — for flexibility, muscle strength and balance. I thought it could help me with all that and I could also have fun doing it.

“I have a different image of it now, but when I tell my friends that I’ve taken up pole dancing they laugh,” he says. “They wonder why I’m doing it. They don’t think it’s something for a man to do. But then I tell them it’s just like when you were a kid climbing things, and that it’s actually a really tough sport.”

Pole dancing’s origins in strip clubs and exotic bars means it has long been saddled with a seedy reputation, but times are changing. Several studios have sprung up around Japan in recent years, offering lessons for men, women and children, with an emphasis on healthy exercise, artistic expression and wholesome fun.

Participants range from beginners looking for a new hobby like Ikehara to professionals like Kaori Ozawa, the owner of Transform and director of the Japan Pole Dance Association. Competitions are widely held around the world, and in October last year the International Pole Sports Federation was granted observer status by the Global Association of International Sports Federations, paving the way for pole dancing to potentially appear in the Olympics one day.

“It’s becoming more popular,” says Ozawa. “The reason I know that is because the traditional mainstream media has picked up on pole dancing. People are seeing it more often now. People are becoming aware that it’s not just something sexy. It has become viewed as another performing art.

“It used to be seen as something sexy performed in bars and nightclubs,” she says. “But if you watch it you will understand that you need muscle strength, you need skill and you need to practice.” 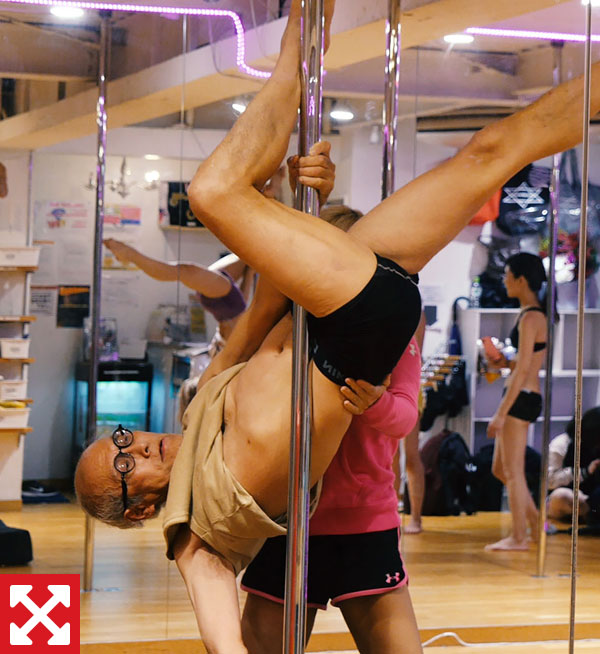 When I tell my friends that I’ve taken up pole dance they laugh. They wonder why I’m doing it. They don’t think it’s something for a man to do. But then I tell them it’s just like when you were a kid climbing things, and that it’s actually a really tough sport.”

The event featured categories for amateur men and women, groups, kids, juniors, pairs and professional men and women. Each entrant was given 3½ minutes to perform a choreographed routine to music of their choice using the two poles set up on stage, with a panel of seven judges awarding scores based on technical and artistic merit.

“With the technical score you’re looking at lines, execution, strength, flexibility, how clean their movement is,” says Natasha Wang, a Los Angeles-based U.S. national who is known as one of the world’s best pole performers and was appearing as a guest judge at the Tokyo event. “The artistic score is choreography, how well they express the music and the theme. The X-factor, star quality type of thing.

“I think Japan was one of the first countries that really developed pole as a sport, so the level in this country is very high,” she says. “The Japanese love costumes and themes and they are known for being fearless, so they take a lot of risks on the pole, which is great to see.”

The performances are undeniably spectacular, combining the strength, flexibility and athleticism of gymnastics with the expressive nature of classic and contemporary dance. The tone of each entry can range from solemn elegance to brash flamboyance, with a wild array of music and costumes on display.

“Today’s theme was ‘cyber,’ ” says 33-year-old Hideki Miyamura, as he pulls a tracksuit over his sparkling black and gold outfit after performing in the men’s professional singles competition. “I wanted to show a different side of me from the image that people usually have. That was the challenge. I usually dance in a classic style, like ballet, very calm, but today I chose a robotic style. I don’t know the name of the music I danced to but the image I wanted was like ‘Final Fantasy,’ like a science fiction video game.”

Performing in the kids category was Nana Hashimoto, a 14-year-old who took up pole dancing when she was 8 and practices twice a week after cram school. She says her classmates are surprised at her choice of hobby because they don’t really know what it is, but she hopes to one day win an Olympic gold medal.

“She isn’t quite at the stage where she can express herself through pole dancing, but she’s become better at appearing in front of people,” says her mother, Megumi. “She’s not so shy any more.

“If you tell people you do pole dancing they think you’re involved in something seedy, but it’s not like that at all,” she says. “It’s more of a sport, especially if you watch the kids doing it. They do it at a really high level. There’s a prejudiced view of it and I’d like that to change.” 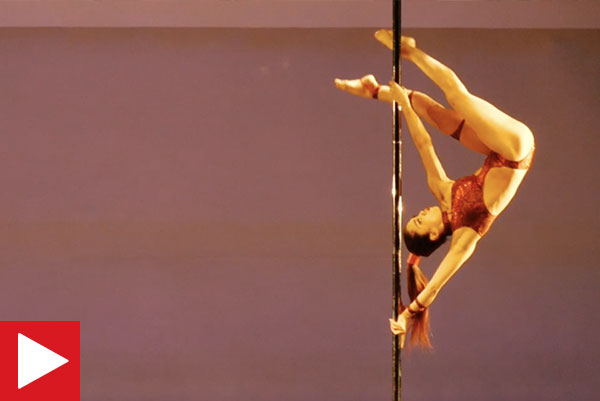 I think Japan was one of the first countries that really developed pole as a sport, so the level in this country is very high. The Japanese love costumes and themes and they are known for being fearless, so they take a lot of risks on the pole, which is great to see.”

Some participants are attracted more to the artistic aspect of pole dancing than its technical, sporting side. Ozawa was working as a nurse until she turned 30 and began to reconsider what she wanted to do with her life. She decided that she wanted to use her body while it was still in good shape, so she took up pole dancing.

Her mother taught traditional Japanese dance and she herself had also practiced it, performing the slow, deliberate movements on stage in a kimono. Now she says her dream is to bring pole dancing to the National Theatre.

“I’d like to see it become established as a genre of dance,” she says, sweeping her long blond hair away from her ankle-length sequined silver evening dress. “You have jazz, ballet, traditional dance. I’d like pole dancing to be in there as well.

“You can express yourself through your performance. It’s also easy to see whether you are able to do something or not, so you need to keep putting in the effort. Dancing on the ground and dancing in the air are different, so it gives you a different sensation. It feels like you’re floating.”

Not everyone is as committed to the craft as Ozawa. Some are simply interested in taking up pole dancing as a hobby, and with around 10 studios offering lessons in Tokyo alone, there are plenty of opportunities.

“I started in September,” says 28-year-old Hina Kondo, who joined Transform’s beginner class at the same time as her friend Asahi Fujimoto. “I wanted to get some exercise and also do something womanly. It’s difficult, but when you become able to do each particular skill it gives you a great sense of achievement. I feel like I’ve begun to develop my muscles already. I had bruises when I first started.”

At the other end of the spectrum are the 10 entrants in the women’s professional singles championship at Miss Pole Dance and Pole King Japan.

The competition begins with a barnstorming Michael Jackson-themed performance by Kiyoko Okamoto, and runs the full gamut of moods, themes and styles until Mana Mikogai brings the curtain down with another high-tempo number.

All the day’s performers are then called to the stage for the results to be announced, and the women’s professional entrants nervously wait until last to discover the identity of the winner. Finally, Momoe Saito is crowned champion — after finishing as runner-up for the previous two years — and accepts her trophy in a sparkling blur of sequins, hair and tears.

“I thought I was going to die when I was waiting for the result,” she says, once her victory has begun to sink in. “I couldn’t believe it when my name was called out.

The foyer of the hall begins to fill up as the entrants and spectators mingle after the competition, exchanging hugs and taking photos before they change back into their everyday clothes to go home.

As Wang, the guest judge, surveys the scene, she contemplates which direction pole dancing will take next.

“Pole, when it first started, was very sexy — lots of heels, sexy movements,” she says. “Then, as more studios opened up and more people started doing pole for fitness, it got very sporty. There were different pole federations that cropped up that really focused on the sports side of pole. So you can’t wear revealing costumes, you can’t do any kind of suggestive movements.

You can express yourself through your performance. It’s also easy to see whether you are able to do something or not, so you need to keep putting in the effort. Dancing on the ground and dancing in the air are different, so it gives you a different sensation. It feels like you’re floating.”