Hideyuki Sugita was exhausted as he scaled the rocky mountain pass in total darkness early one Friday late last month.

The 31-year-old former Keio University rugby standout was also overwhelmed with satisfaction — not merely because he was climbing Mount Fuji with old classmates, but more importantly because he was proving his disability would not stand in the way.

Defying heavy rain, gusty winds and freezing temperatures, he carefully trod each step with about 100 former teammates and friends making their way to the top of the 3,776-meter behemoth.

The expedition was a long time coming.

Twelve years ago, he and his teammates had planned to hike the mountain on the last day of a summer camp. But a practice game in August that year changed his life, leaving him paralyzed from the chest down. A doctor told him he would never walk again.

Though the mountaineering plan was scrapped, Sugita made a promise to his teammates: He’d walk again and take on the mountain with them. Five years passed. Ten years passed. At his classmates’ weddings, his friends would badger him about making the trip.

Thinking his window was closing as he turned 30 last year, he decided to finally deliver on his promise.

“Everyone kept asking me the same question,” Sugita said. “Gradually I came to understand that they were serious. It wasn’t me. It was the people around me.” 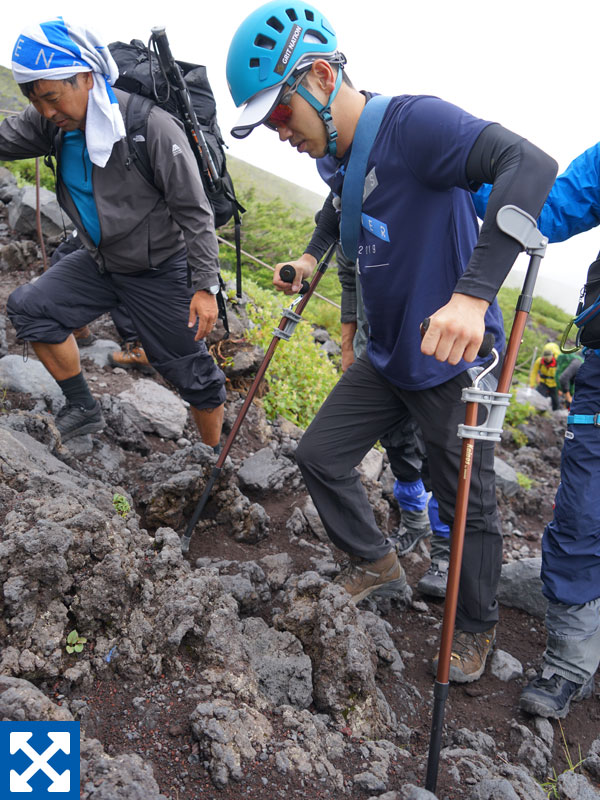 Hideyuki Sugita climbs Mt. Fuji with support from his friends. COURTESY OF J-WORKOUT

Sugita was born on April 15, 1988, the youngest of four siblings. He stumbled upon rugby when he was in the eighth grade. His neighbor asked him whether he’d be interested in playing on a district team in Tokyo.

Although rugby was not the first sport he had played, he was instantly hooked. He became enamored with the unshakable camaraderie formed among its players. In volleyball, which he used to play, a net divided the teams. In rugby, players came into contact with one another, sometimes violently. The contrast captivated him. He soon started playing on teams on weekends.

At Keio Senior High School and later Keio University, both rugby powerhouses, his teammates quickly grasped his uncanny talents as a flanker in high school and a prop in college.

It was a dry, sunny afternoon in Sugadaira, Nagano Prefecture, about 230 km northwest of Tokyo. He was among roughly 35 elite players of all grades chosen to participate in a 10-day exclusive boot camp — and one of the few freshmen.

During a practice game near the end of the camp, Sugita was called onto the field.

When the whistle blew, he went into the scrum and pushed, as he had done dozens of times before.

As he lay on the field, fears of injury rushed through his mind.

Soon he felt his body sensations disappearing. It felt as if his legs had fallen asleep — but the feeling was permeating his entire body. His teammates’ reactions were markedly different.

The next thing he knew, he was placed on a stretcher and taken to a nearby surgeon, and later airlifted to a hospital in Nagano.

Sugita had snapped his neck, severely damaging his spinal cord. He was paralyzed from the chest down, but the doctors didn’t immediately tell him of his condition.

Signs indicated the injury was grave.

Panic hijacked his thoughts. Doctors urged him to calm down.

“Don’t move!” a doctor shouted. “You may die if nothing is done. We’re going to perform surgery.”

Not knowing the extent of his son’s injuries, Sugita’s father, Kouichi, rushed in from Tokyo.

A doctor explained the situation and told the elder Sugita that his son would never walk again. Even in the best case scenario, he’d be wheelchair-bound for the rest of his life, the doctor said.

His father reacted with indignation.

“We’re going to make him walk again,” he screamed at the doctor, “no matter what.”

“I went insane,” the elder Sugita recalled at his home in Tokyo one day in June, holding back tears.

Sugita’s surgery lasted for hours, going well into the next day. When he awoke, his head was firmly fixed in place by what is known as a halo vest — a neck bracelet with pins that are embedded in the skull.

“I couldn’t clear my throat since I couldn’t use the muscles. I couldn’t breathe properly,” Sugita said during an interview earlier this year.

“I kept trying to apologize to my parents, but I couldn’t even speak … I just felt incredibly sorry for them,” he continued, beginning to tear up. “I really don’t want to be an inconvenience for other people.”

After about a week, Sugita was transferred to a hospital in Tokyo, where he struggled to come to terms with his condition.

“It’s just a broken bone. I’ll be back to normal when I wake up in the morning,” he said he kept telling himself. “I’ll be all right.”

Sugita had snapped his neck, severely damaging his spinal cord. He was paralyzed from the neck down, but doctors didn’t immediately tell him of his condition. Signs indicated his injury was grave.

His friends visited him at the hospital but didn’t know what to say. Awkwardness hung over the meetings, prompting Sugita to ask them not to visit for the time being.

Fluctuating between optimism and despair, his desire to walk again remained the one constant.

Sugita’s mother, Asako, recalled an encounter she had with his doctor, Masaya Nakamura, a leading expert in regenerative medicine and the application of iPS cells in humans.

“(He) told Hideyuki, ‘Mr. Sugita, if you could wait three, no five years, you’d be able to walk again,’ ” she recalled. “ ‘We did experiments using iPS cells on mice and rats and they were successful. There’ll be a time when the cells can be applied to people, so you’ll be able to walk if you can wait five years.’

“Then, Hideyuki said, ‘Doctor, I can’t wait that long, so I’ll walk by myself,” she recalled. From that moment, his parents were convinced he would walk again.

Soon, feeling began to return to his legs. Astoundingly, about a month into his hospitalization, he was able to ever-so-slightly wiggle his right big toe. Then it was his left toe. Soon it was his right index finger. Calves and thighs twitched. He became able to roll over and sit upright in his bed.

“It’s like you died once and were born again,” he said.

After about three months in the hospital, he was relocated to a rehabilitation center in the suburbs, where he stayed for a year. By then, he had recovered to the point where he could sit up and use a wheelchair. Despite asking for space, his friends continued to visit.

But Sugita felt guilty: He was not recovering at the pace he desired.

Understanding that nothing would change if he were to simply remain in bed, he tried to walk in rehabilitation sessions. He wanted to share with his friends that he could again eat meals and get dressed on his own. Miraculously, he got to the point where he was able to take a few steps.

While waiting to gain readmission to Keio University, which was itself proving an arduous task, Sugita flew to the United States to take part in rehab work at a special gym in San Diego in autumn 2008, about a year after his injury. The trip was recommended by his trainers at J-Workout, Japan’s sole gym facility exclusively for people with spinal injuries.

When he returned a few weeks later, his father greeted him at Narita Airport. But after briefly stepping aside to take a business call, he was stunned by what he saw when he came back: His son was rising from his wheelchair and making his way to a nearby vending machine to buy juice.

With the aid of a pair of canes, he was walking again.

In hindsight, Sugita doesn’t believe the doctors in Nagano erred in their diagnosis. Any doctor who saw his X-rays and MRI scans from back then would have concluded the outlook was bleak, he said.

But Masaki Tanino, president of J-Workout and a trainer who has known Sugita since his injury, had a different assessment. Although the injury was indeed grave, Tanino believed Sugita would be able to recover.

Tanino speculates the dire diagnosis derived from the difficulty in accurately evaluating such critical injuries soon after they occur, especially considering the quality of X-rays and MRI scans at that time.

While Sugita is not yet 100 percent — he still needs canes to walk and avoids crowded trains — he can hold chopsticks and feel warm and cold.

“I don’t think even a little bit that getting injured was a good thing,” Sugita said in March. “But because I was injured, I was able to understand the importance of family. I realized there are people out there who worry about me. I was able to be kind to people.”

After going back to school, Sugita graduated from Keio with a degree in policy management, with a year and a half delay. He joined Goldman Sachs in January 2013.

Despite the demanding workload, he was happy just to be self-reliant and gainfully employed — two things he feared he would never be able to do again.

At the summit of Fuji, Sugita’s friends and teammates were waiting in a circle. Clapping and cheering, “You’re almost there,” they greeted him near a torii in front of a shrine. A few of his friends were less than 5 meters behind him, hoisting his specialized wheelchair along as Sugita took the last strides with his trekking poles.

After deciding to attempt the climb, Sugita hit the gym before work each day and trained at J-Workout twice a week. He and his close group of friends got together more and more frequently to plan out the project, which they dubbed “Forever Friends.”

“I feel I’d gained something big by the time he made the decision,” friend Yosuke Ochiai said in the weeks before the climb. “That in itself was enough for me. It made me really happy.”

The path to the top was full of peril, and not just for Sugita.

When he reached the sixth station that Friday morning at around 6 a.m., his guide notified him that a person who was higher up, at the ninth station, had collapsed after getting hypothermia, and that dispatchers were hesitant to dispatch a rescue team because the weather had taken a turn for the worse.

The guide advised Sugita that it was too treacherous to continue and recommended he start descending. If Sugita was injured, the guide told him, it would set a dangerous precedent that could prevent those with disabilities from ascending Fuji in the future.

He swatted that suggestion away, eventually taking shelter in a mountain hut and taking a nap.

When he woke, he learned that one of his friends, a pilot, had gotten hold of a wind forecast that indicated there would be a three-hour window to make it to the eighth station that day. With this forecast in hand, they were able to convince the guide to move forward with the trek.

Sugita completed the final stage from the eighth station to the summit, well above the clouds, partly with a wheelchair. He made it to the top shortly after 10 a.m. Saturday, becoming just one of a handful of people with severe injuries to reach the apex of the legendary landmark.

As he made it to the peak, his friends lined up to shake his hand and hug him. Some were sobbing. Others had ear-to-ear grins.

“It was a special time. … It was exhilarating climbing the mountain with my friends and talking with them with a smile,” Sugita said just days afterward.  “I don’t think I’ll experience something like that ever again.” 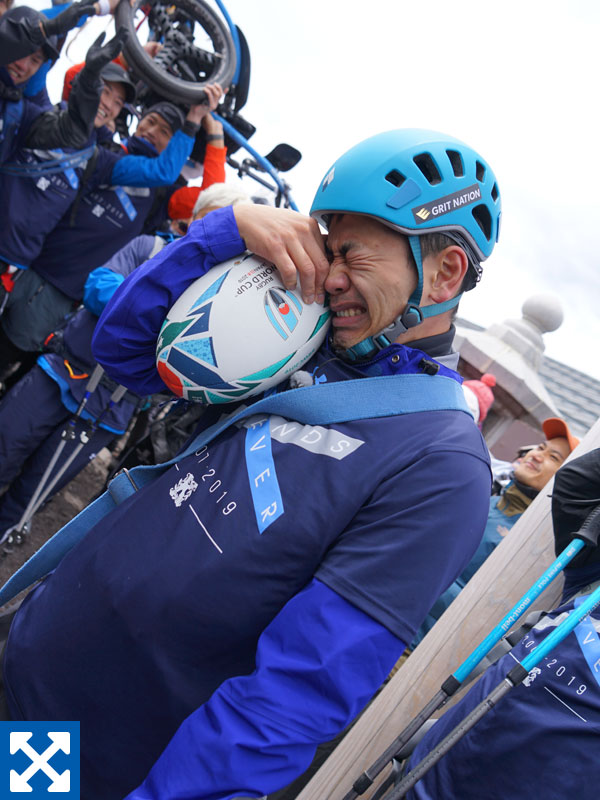