Jay Noyes, clad head to toe in the steel armor of a medieval knight, is steadily advancing toward me with a longsword — which he intends to hit me with.

I raise my buckler — a small metal shield about the size of a hubcap — and peer through the bars of my helmet, which is heavy, hot and making me increasingly claustrophobic.

Suddenly, my head snaps back and a loud clang rings out around the caged arena. “Good,” I shout, to confirm that Noyes has scored a direct hit on me, although I can’t help but feel that the force of the blow speaks for itself.

I lower my sword, which is made of a flexible type of wood called rattan, and move to the side to let the next fighter take my place. I am five minutes into my first taste of medieval martial arts at Castle Tintagel in Tokyo’s Mejiro neighborhood, and I am already exhausted.

Noyes allows me to sit down and take a break. Who says chivalry is dead?

“Almost everybody here is actually very kind and friendly, but the fighting is all-out,” says Noyes, an American who 11 years ago founded Castle Tintagel, a medieval martial arts school that also has branches in Sendai and Nagoya.

“We’re not interested in people who are going to be here angry and yelling,” he says. “But it is extremely full-contact combat. It makes an impression on people.”

Castle Tintagel, named after an English castle associated with the legend of King Arthur, teaches students how to fight like the European knights of the 14th and 15th centuries, in both armored and unarmored combat. It now also runs a class teaching Bushido — the way of the samurai.

The medieval style of fighting, which involves a variety of weapons such as swords, pole axes, daggers and spears, is commonly known as buhurt and has a niche but devoted following around the world, particularly in Eastern Europe. The weapons are mostly made of rattan, but hollow steel versions with blunt blades conforming to safety specifications are also used.

Rules vary and so can the number of fighters, with some competitions pitting teams of 100 or more against each other in one wild, brutal free-for-all.

Clearly, it is not for the faint-hearted. 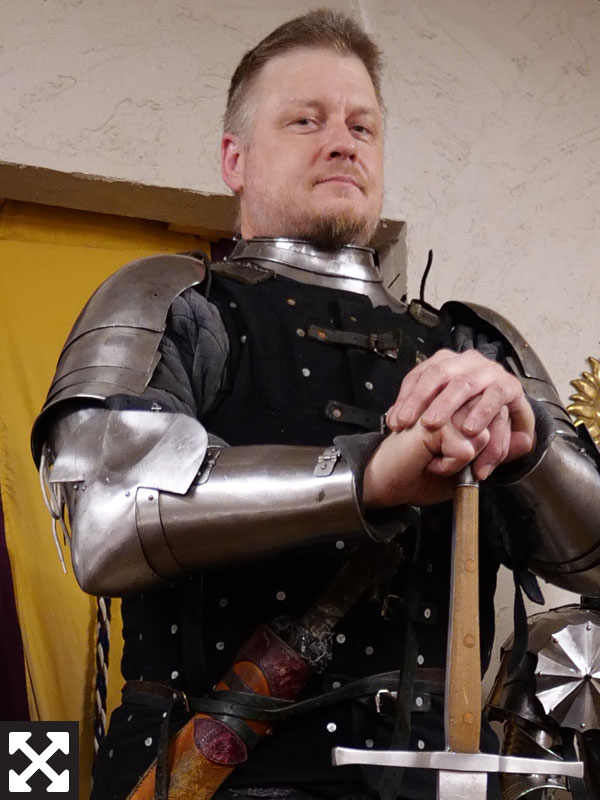 Fighters in the armor of samurai warriors and medieval European knights pose for a photo. CHISATO TANAKA

“It can hurt,” says Noyes. “The armor usually protects you from most of it, but every now and then something gets through or you break a finger. We try to minimize that. We’ve got good safety standards that are really well proven, that we stick to. Our biggest worry is actually our knees. People can stretch a knee just like in any sport.”

Noyes grew up in rural Missouri fascinated with the romantic image of knights and fantasy novels such as “Lord of the Rings.” He first came to Japan in 1991 as an English teacher before returning to the United States to go to grad school, where he joined a historical re-enactment group called the Society for Creative Anachronism, which practiced a gentle version of buhurt.

Noyes returned to Japan in 1996 and maintained his interest in medieval martial arts, practicing with friends in public parks until he got sick of being told to go elsewhere and opened Castle Tintagel in 2008.

At first, the school was more of a historical re-enactment society, offering period costume and dance classes as well as combat. Over time, Castle Tintagel began to focus more on martial arts, and now has between 80 to 100 students. Many of them had absolutely no prior experience with combat sports.

“I’ve been doing this for about 7½ years,” says Miki Ito, a 53-year-old fantasy author who goes by the nickname Pain. “I originally came here to interview someone about renaissance dance, but that day they were all fighting with swords. I tried it and I’ve been doing it ever since.

“I think it’s actually a very good sport for women, once you try it,” she says. “If you keep doing it, you lose weight. It’s also a good way to get rid of stress. It can help you to become a stronger person and it also helps your posture.”

I think it’s actually a very good sport for women, once you try it,” she says. “If you keep doing it, you lose weight. It’s also a good way to get rid of stress. It can help you to become a stronger person and it also helps your posture.”

For some, the equipment is just as appealing as the sport itself. The armor is generally made from hardened steel and is designed to faithfully recreate the historical versions. Practitioners usually buy from online makers in Russia, Ukraine or the U.S., although Castle Tintagel also sells pieces and equipment is often recycled among the students.

It does not, however, come cheap.

“This armor is a replica of the kind worn from the 7th to 13th centuries by the Crusaders, all historically accurate,” says Naoki Sato, a 34-year-old system engineer. “All in all, it cost just under ¥300,000. I bought it as a set, apart from the body armor. With the body armor, I would find extra pieces now and again and add to it.

“When you do it as a sport, your taste in armor begins to change,” he says. “I used to like metal plate armor, the kind that you see in video games. But when you wear it and experience how you actually move in it, you begin to favor armor that is easier to move in.”

Noyes originally started Castle Tintagel to explore his interest in the medieval knights of Europe, but in recent years he has added a Japanese flavor. Instructor Katsumi Tanaka teaches a class on the way of the samurai, using swords, spears, halberds, daggers and grappling.

“But in everyone’s heart of hearts, they really want to use the real thing,” he says. “So I thought, ‘If you can do it, why not try it?’ When I first tried it, I could really feel that everything I had been taught up to that point had been based on fighting in real armor.”

Buying samurai armor is not easy, even in Japan. One Castle Tintagel student in Nagoya was so frustrated by the lack of options that he bought an authentic set from the 17th century and wore it for everyday sparring.

A more common — and less expensive — approach is for participants to make their own. Atsushi Kasahara spars at Castle Tintagel and also competes in Japan Armored Battle League, a competition involving three teams mostly made up of the school’s students. Kasahara recently tailor-made a suit of steel samurai armor for his teammate, Mineko Nasu.

“It took about three to four months to make, although the design took a little longer,” says the 45-year-old Kasahara, who works as a firefighter and had no previous experience of metalwork. “This is the fifth suit of armor I’ve made. The previous ones were just standard replicas, but this time I made it specifically for her measurements. I read a lot of books and things on the internet to teach myself.”

The constant wear and tear on equipment means everyone who fights at Castle Tintagel must learn to maintain their own gear, and the school workshop sings with clanks and clangs as a group of regulars prepare to spar on a Sunday afternoon in February.

Despite having only had time for a brief training session with Noyes beforehand, I will — with some trepidation — be joining them. First, I must put on my suit of armor, and it takes the school’s “squire” around 45 minutes to affix the various greaves, gorgets, spaulders and poleyns to my body.

Once I have been fitted with a helmet, the overall ensemble weighs around 30 kilograms. It is heavy but allows me to move more freely than I had expected, and Noyes encourages me to walk with an upright posture to minimize discomfort.

Once in the caged fighting arena, Ito, the fantasy author, demonstrates a “light” blow by hitting me on the head with her sword. The impact rattles my helmet but does not actually hurt. Next, she gives me a “medium” blow, enough to knock me off-balance but still bearable. Her “hard” blow, on the other hand, makes my ears ring for a good five minutes and leaves me dizzy and disorientated.

The sparring itself is an intense experience. The blows do not necessarily hurt as such, but the sudden, ferocious nature of their impact leaves me shaken and bewildered. The helmet also becomes uncomfortable very quickly, and the weight and stiffness of the armor leave me dead on my feet.

“It gets pretty rough in summer,” says Noyes.

I sit down and leave the fighters to continue sparring, and the force of some of the hits makes me wince as I watch from behind the cage.

Castle Tintagel also rents armor and costumes to entertainment groups, and Noyes has done motion-capture work and consulting for movies and video games, including the “Final Fantasy” series.

Watching him smash one of his fellow fighters in the face with a steel buckler, however, it is clear there is nothing else he would rather be doing.

“I get bored easily, and there is no lack of variety,” he says. “Today I might do longsword, tomorrow I might do dagger, the next day I might pick up a rubber chicken and hit somebody with that. It’s all good.

“I have all these different ways to exercise and practice,” he adds. “I have all the cool people to practice with. What’s not to like?” 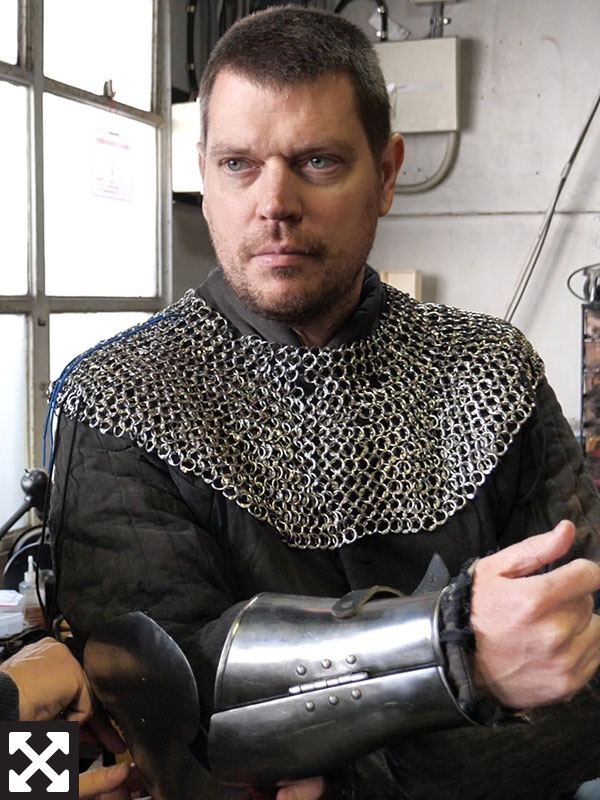 Author Andrew McKirdy, rocking his chain mail, contemplates the meaning of life before his imminent death on the battlefield. CHISATO TANAKA

Once in the caged fighting arena, Ito, the fantasy author, demonstrates a “light” blow by hitting me on the head with her sword. The impact rattles my helmet but does not actually hurt. Next, she gives me a “medium” blow, enough to knock me off-balance but still bearable. Her “hard” blow, on the other hand, makes my ears ring for a good five minutes and leaves me dizzy and disorientated.