Dissecting the secrets of the legendary giant squid

In ancient legend they were called the kraken, fearsome sea monsters of giant proportions that would drag sailors down to their doom.

More than 2,000 years later, the world still remains mystified by the creatures we now know as giant squids.

But researchers, led by internationally renowned zoologist Tsunemi Kubodera, are doing their best to unlock the secrets of the fabled deep-sea denizens.

Last week at the National Museum of Nature and Science in Tsukuba, Ibaraki Prefecture, Kubodera conducted a dissection of a 394-cm-long specimen along with a team of researchers from universities and other institutions around the country.

“The giant squid is a very rare animal,” said Kubodera, who in 2012 became the first person in the world to film one of the giant creatures in its natural habitat, descending nearly 1 km beneath the surface in a small submersible to record the creature near the Ogasawara Islands about 1,000 kilometers south of Tokyo.

Giant squids are one of the most seldom-seen animals in the world, and much about them remains unknown.

They are believed to be able to grow up to 13 meters long, and can weigh almost a ton. They live at depths of anywhere between 300 and 1,000 meters, and have eight arms and two additional longer feeding tentacles. These are tipped with hundreds of jagged suckers, which they use to snatch prey from up to 10 meters away.

Giant squids have two eyes the size of dinner plates — the largest in the animal kingdom — and a sharp beak similar to a parrot’s. The main part of the body is called the mantle, which houses all the basic organs. On the underside of the body is the funnel, which the animal uses to exhale, expel waste, lay eggs, squirt ink and propel itself through the water.

“One of the things that I like best about them is their size,” said Kubodera, who in 2004 became the first person in the world to photograph a giant squid in its natural habitat, and in 2006 became the first to film one in any environment when he caught one with bait off the Ogasawaras.

“You don’t normally see squids as big as that,” he said. “When you dissect a normal-size squid, the stomach is very small and so are all the other parts. When you dissect a giant squid, you need to use your whole body just to move it. They really make an impression. They have the same bodily makeup as normal squids, but they are much larger. That’s the appeal for me.” 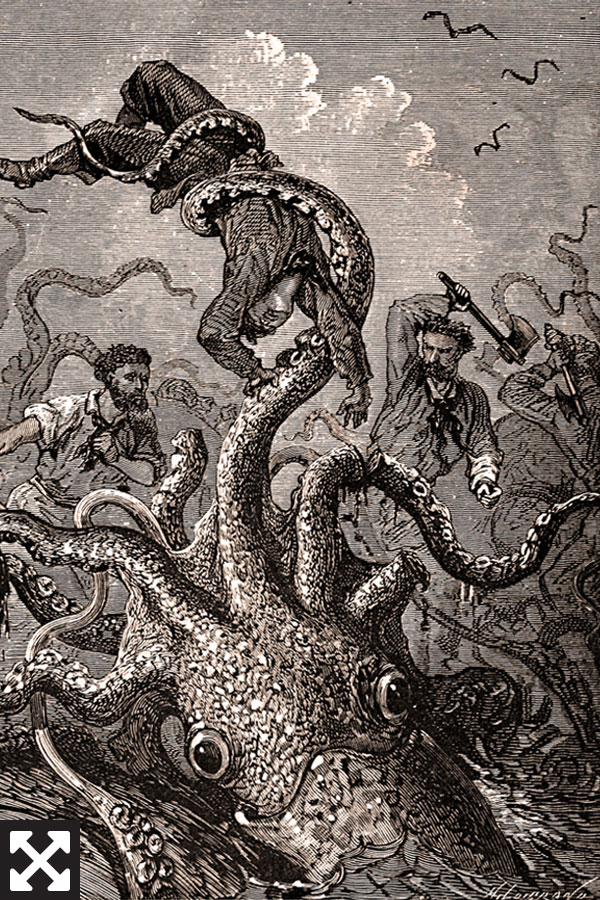 In ancient legend they were called the Kraken,  fearsome sea monsters of giant proportions that would drag sailors down to their doom. More than 2,000 years later, the world still remains mystified by the creatures we now know as giant squids.

With its tentacles spread out on the floor, a giant squid that was dissected last week at the National Museum of Nature and Science in Tsukuba, Ibaraki Prefecture, measures nearly 4 meters long. SATOKO KAWASAKI

Professor Mitsunaga Narushima, chief of the department of plastic and reconstructive surgery at Mie University, was invited to assemble a team of researchers to take part in the dissection. The 15 team members were drawn from a range of medical fields and assigned different roles according to their area of expertise.

“This was a very valuable opportunity, so I asked a lot of people from different fields of research to come and look at the giant squid from a medical point of view,” Narushima said. “We have people looking at the nervous system, at the eyes and at the blood.

“My field of research is the nervous system. Plastic surgeons do a lot of treatment on peripheral nerves and I am looking at developing a new treatment. I’m trying to create a model based on experiments on live squids. No one really understands the workings of squids, so I have been trying to find out by asking people like Kubodera. He said no one really knows, so he asked if I would like to come along and get involved. I thought it would be interesting to do that from a medical point of view, looking closely at the nervous system.”

The team dissected a squid that had washed up in the Bentenhama area in Itoigawa, Niigata Prefecture, in March 2014. It was frozen the same day and then stored at the museum in Tsukuba. The squid was thawed the day before the dissection.

Kubodera began by laying the squid on the floor of the dissection room, washing it with a hose and then spreading the tentacles out to be measured. The total length of the animal was 394 cm, with a 165-cm-long mantle and tentacles that extended up to 187 cm. It weighed 174 kg.

Kubodera cut open the mantle as the researchers looked on, and removed the internal organs including the stomach, liver, reproductive organs and hearts. Giant squids have two hearts — one brachial and one systemic.

“We found out it was a mature female,” said Kubodera. “It was a female and it had very large ovaries. The fallopian tubes were also very large, and it seemed as if it was in a condition where it would have laid eggs that year. I’ve never seen fallopian tubes as big as that.”

Once the parts of the squid were separated, the researchers took a closer look at the areas that interested them.

“Squids are special,” said Chihena Banda, a postgraduate student in Narushima’s plastic surgery department at Mie University who moved to Japan from his native Zambia in April. “They’ve got giant nerves and it’s a nice way to study how nerves function. You can apply that to human beings as well.

“I knew the professor is into nerve research, but I didn’t think we would be studying it on a squid. But it’s exciting because it’s got special features that no other animal in the world has, and an opportunity like this — to explore this animal, study it and finally get to translate all this hard work into human benefit — is a good opportunity for me.” 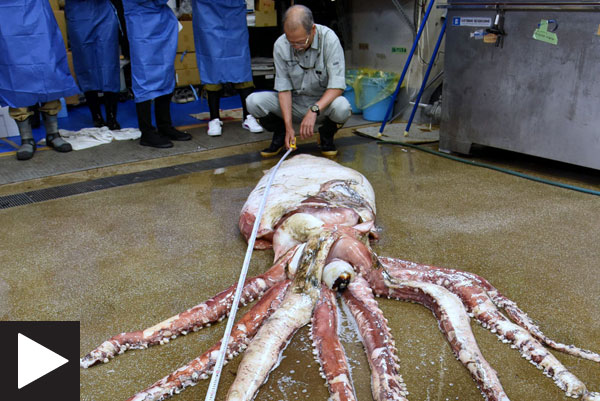 Kubodera began by laying the squid on the floor of the dissection room, washing it with a hose and then spreading the tentacles out to be measured. The total length of the animal was 394 cm, with a 165-cm-long mantle and tentacles that extended up to 187 cm. It weighed 174 kg.

The dissection was organized by filmmaker Shinichi Motoki, who is currently making a documentary about Kubodera’s work. Motoki will also film Kubodera hunting giant squids in Toyama Prefecture next January and February, and he aims to complete his documentary by April or May. He intends to market the film to an international audience.

The expedition on which Kubodera filmed a giant squid in the wild for the first time was part of a collaboration between NHK and the Discovery Channel, and produced ground-breaking programs which aired on those channels in 2013. Kubodera’s work has not been broadcast since then, however, and Motoki is keen for the world to take notice.

“It’s a very basic form of science. Why is a leaf green? If you know the answer to that, that leads to something further. He’s always searching, always pursuing something.”

Giant squids live in all the world’s oceans, but sightings are most common off the coast of Japan. Motoki explains that trenches in the Sea of Japan act as a trap for the animals and the cold water temperatures in winter force them to the surface, where they are swept toward shore by strong winds.

“Giant squids are one of the rarest animals to see, but you can see them in the seas around Japan,” he said. “You can see them come right into ports, but you only see that in Japan.

Kubodera is now 67 and technically retired, and he has been given the title of curator emeritus at the National Museum of Nature and Science. He has also researched octopuses and normal-size squids over the course of his career, but he acknowledges that it is always the giant variety that appends itself to his name whenever he is mentioned in the media.

As he goes about his business in the dissection room, pointing out details to the researchers and peering with wonder at the creature’s inner workings, it is clear he wouldn’t have it any other way.

“I’m too old for new challenges,” he said. “But there are still things that I’m involved in that I have to make sure I do properly. I’m still involved in surveys in Japan. There are varieties of octopus and squid that still don’t have names. We have to give them scientific names, and that is one job I am involved in.

“Then there is the next generation of children. I want to teach them about the interesting things that live in the sea. So I am still involved in filming underwater in Japan and putting that information out there.” 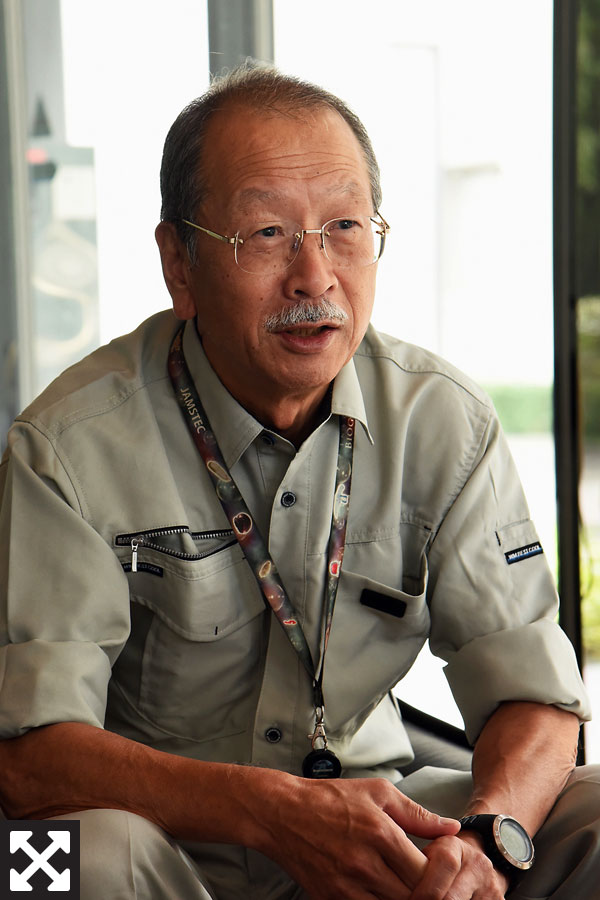 The members of the dissection team pose for a photo before the procedure. SATOKO KAWASAKI