The distinctive sound, appearance and short lifespan of cicadas have earned them a special place in Japanese culture. GETTY IMAGES

From classic literature to anime, seasonal insects have special place in country’s culture

It’s summer in Japan. Open the window and what do you hear?

It all depends on where you are, what time of day it is and who you’re speaking to.

One thing is certain, though. If it’s midsummer, you’re likely to hear a cicada calling from somewhere.

“I don’t think people really like cicadas,” says Shuhei Nomura, senior curator for the zoology department with the National Museum of Nature and Science. “There are lots of them and they’re noisy. But if they weren’t there, it would feel kind of lonely. Japanese people think of cicadas as a symbol of the summer.”

Cicadas — known as semi in Japanese — are a superfamily of insects with around 2,000 known species worldwide, around 35 of which live in Japan. Although cicadas are most common in areas with tropical climates, they can be found as far north as Hokkaido.

Cicadas live for several years underground as nymphs before emerging in summer or, much less commonly, spring. Once above ground, they shed their exoskeletons to complete their transition into adulthood.

Adult cicadas live for only about a month before they die, but they certainly make their presence felt during their short lifetimes. Males produce a call that borders on deafening, rapidly contracting and relaxing membranes in their abdomens in a bid to attract mates. 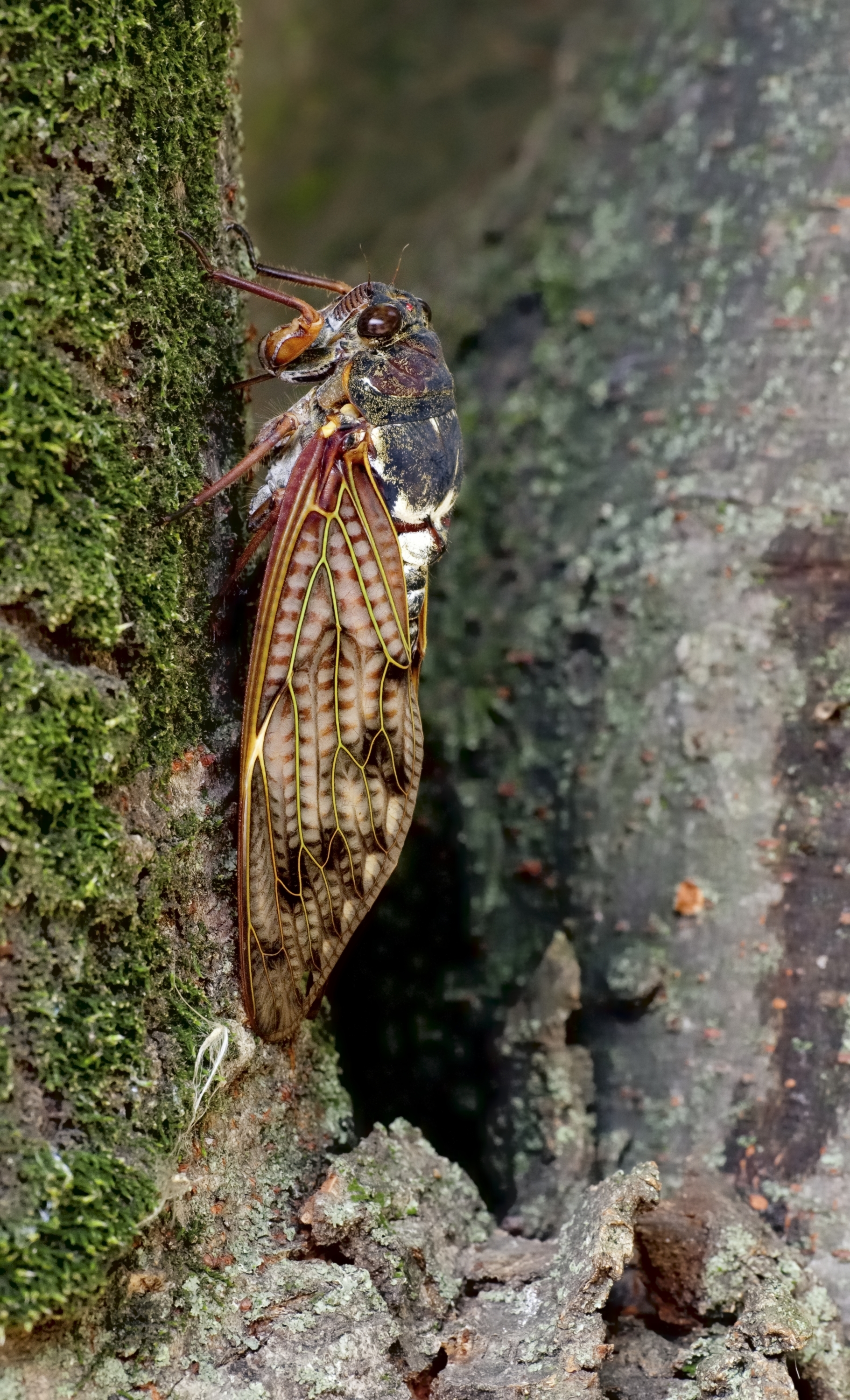 The distinctive sound, appearance and short lifespan of cicadas have earned them a special place in Japanese culture, and the insects have appeared in numerous pieces of art and literature over the years.

The title character in the classic novel “The Tale of Genji” likens the way one of his lovers drops her robe to the way a cicada sheds its skin, while one of poet Matsuo Basho’s most famous haiku includes the lines “shizukesa ya iwa ni shimi iru, semi no koe” (“in the quietude seeping into the rock, the call of cicadas”).

“In my picture, you have the gray pole, the mark of a dog that has gone, and the remains of a cicada that has flown away,” Aida says. “Normally, a cicada would rest on a tree. It wouldn’t emerge from its shell on a telegraph pole — it’s fiction. But the picture is meant to convey the emptiness of a modern Tokyo filled with asphalt and concrete. The hollow cicada shell is meant to express emptiness.”

The call of cicadas can often be heard on TV shows and anime. According to Aida, the sound serves as a shorthand method of conveying the atmosphere of the Japanese summer to audiences.

“Japanese summers are not clear or refreshing,” he says. “They’re so hot and humid that you feel like you’re going crazy. Then you have this huge number of cicadas all making this noise at the same time. It really stands out, so if you’re trying to convey the sense of it being the height of summer in a movie or an anime, you can include the sound of cicadas and everyone will understand straight away.”

Aida even goes as far as to say there is “a stench of death” surrounding cicadas in the public imagination.

He notes that Bon — the annual Buddhist ritual where the souls of dead ancestors are said to revisit household altars — and the anniversary of the country’s World War II surrender both fall around Aug. 15. Personal memories or TV portrayals of these events are, therefore, invariably accompanied by a chorus of screeching cicadas, forming an indelible mental association for many people.

Not everyone views cicadas in such a morbid light, however. Museum curator Nomura says the insects have a number of specific features that have even inspired technological innovations.

“There are 35 species of cicada in Japan, but each one is completely different,” Nomura says. “That’s very interesting.”

Each species varies in terms of shape, size, color, call, habitat, behavior, what time of year they emerge and what type of trees they suck sap from. The most common species in Japan include the abura zemi, min-min zemi, kuma zemi and nii-nii zemi. 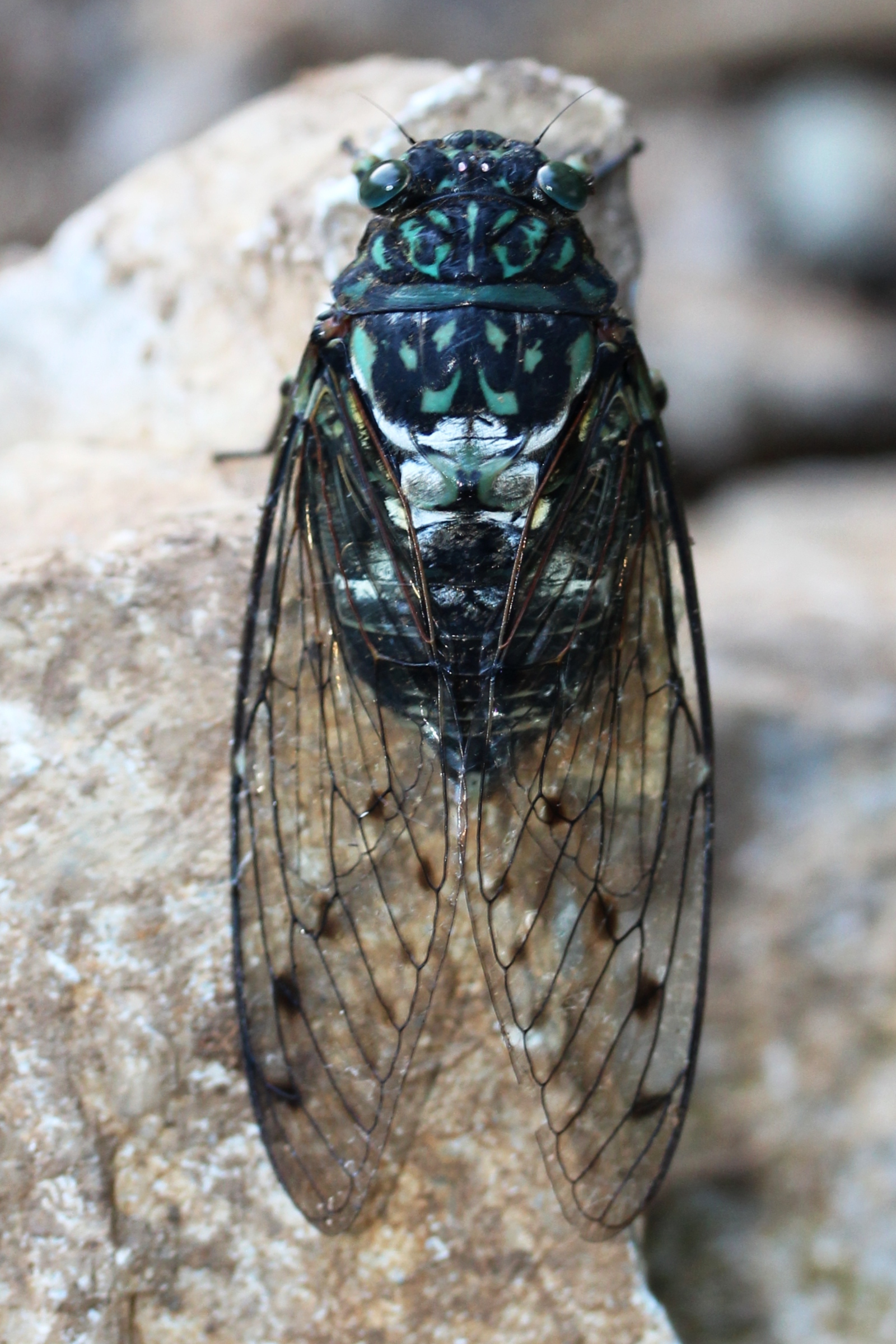 Hyalessa maculaticollis, known in Japan as the min-min zemi due to its song. Press play to hear its dictinctive call. PHOTO: Alpsdake - CC BY-SA 3.0
AUDIO: Σ64 - CC BY 3.0 jp

In most cases, the names given to Japanese cicada species are derived from the noises they make. The abura zemi — abura meaning oil in Japanese — is so called because its jin jin jin jin jin call resembles the sound of food frying in a pan. One exception is the kuma zemi (bear cicada), which is named for its large size.

Not all parts of Japan refer to cicada species in the same way, however. According to Nomura, there are many regional distinctions.

“There are lots of different ways to express the sounds that cicadas make in Japanese,” he says. “It’s like with bird songs, where people use a word to describe the sound of a particular call.

“For kuma zemi, people usually say sha sha sha sha, but in Kyushu they describe the call as washi washi washi washi. They use the name washi-washi semi for that species. The call is the same, but the way people hear it is different. Different regions have different ways of hearing the calls.”

Different species of cicada also call at different times of the day. According to artist Aida, filmmakers can trade on that latent knowledge to evoke certain emotions in viewers.

“The species that people like best is the one that calls when the sun is going down and the day has cooled off,” he says. “They’re called higurashi. People feel relieved that the heat has gone down slightly and it’s a little more comfortable. It’s a nice feeling. That sound appears in films a lot.”

While adults may not be so keen to get a close-up look at cicadas, children are much more enthusiastic. Collecting the discarded shells of cicada larvae is a popular summer pastime, as is catching the full-grown insects in nets.

Nomura says collecting discarded shells is both safe and hygienic, but he urges caution when trying to snare the full-grown adults.

“A cicada will expel urine at something to try to surprise it when it’s trying to escape,” he says. “It’s much more difficult to catch a cicada than you might think. You would think that a bigger net would be best for catching them, but it’s actually better to use a smaller net. If you’re accurate with a smaller net, they won’t be able to fly out of it.”

But why even bother to try to catch something that Aida describes as “grotesque”? Cicadas have none of the glamorous appeal of rhinoceros beetles or stag beetles — both wildly popular with Japanese children — and are too common to be considered rare treasure.

Curiosity, Nomura says, is the answer.

“If kids don’t catch cicadas, they won’t be able to find out what kind of insects they are,” he says. “That’s the reason they catch them.” 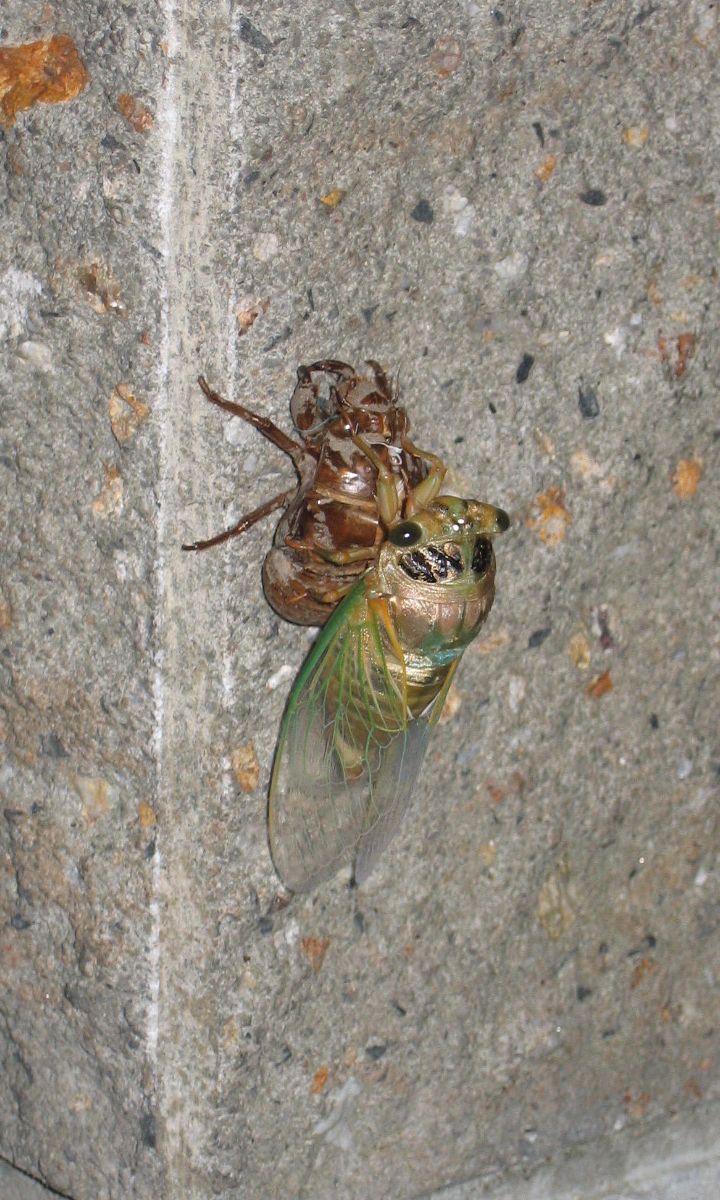 A cryptotympana facialis, known in Japan as the kuma zemi , emerges from its shell. Press play to hear its dictinctive call. PHOTO: Alpsdake - CC BY-SA 3.0
AUDIO: Σ64 - CC BY 3.0 jp