A weekend in Oita

If the city’s not enough, head to the country

Nice place for a drive: Though inaccessible without a car, the Kunisaki Peninsula is a perfect introduction to countryside Japan. OSCAR BOYD

From mountain caves to hot springs, Oita is where nature goes to play

Nestled along the east coast of Kyushu, the city of Oita is home to almost half a million people, making it by far the largest urban center in Oita Prefecture. However, aside from the prefectural art museum, there is little that is unique about this coastal conglomerate, especially when compared to larger cities across the country.

Instead, a trip to Oita is best used by exploring the extensive bounty of the prefecture, home to mountain temples, secret hot springs and the god of war. 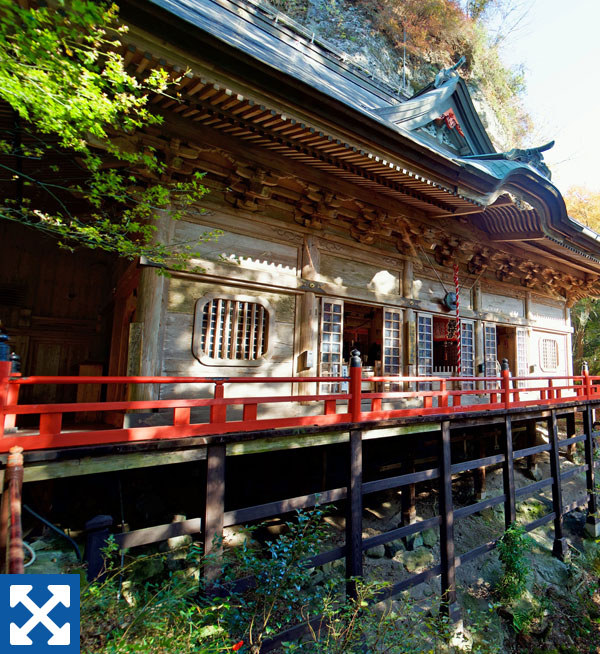 Mountain temple: Close to the summit of Mount Futago, the Futagoji temple complex is spread throughout a forest. OSCAR BOYD

Almost all transport links to Oita cut across the mountainous Kunisaki Peninsula. The area is best explored by car — and well worth doing, for it is home to a dozen or more mountain temples.

Of these, Futagoji temple (Akimachifutago 1548, Kunisaki; ¥300) is the most spectacular. Located close to the summit of Mount Futago, the temple complex comprises numerous buildings spread across the wide and heavily forested slopes of the mountain.

At the entrance to the temple, Mi Cafe — a small coffee stand — serves fresh coffee and snacks. The adventurous can ascend the mountain to reach various secondary temple structures (maps are available at the ticket booth) and all the way up to the jagged pinnacles at the summit.

For lunch, drive about 25 minutes to Ryoan Fukinoto (Tashibufuki 2365, Bungotakada), which serves a choice selection of homemade vegan soba noodles.

There are few better shrines to visit in Japan than Usa Jingu (Minamiusa 2859, Usa).  It is an exceptional shrine, dedicated to the deified spirit of Emperor Ojin, aka Hachiman-jin — the god of war. The shrine is at once orante and austere, perched atop a hill overlooking the flats of the Usa region in the west of the Kunisaki Peninsula.

Usa Jingu is still patronized by the Imperial family, and it is second only to the Grand Shrines of Ise, Mie Prefecture, in its stature within the Shinto religion. The shrine is separated from its surroundings on three sides by rivers and, inside, wide boulevards lead past the treasure house to the inner shrine, which has been designated a National Treasure and is surrounded by giant camphor trees, some of which are approaching a millennia in age.

Ornate yet austere: Usa Jingu, located on the western edge of the Kunisaki Peninsula, is one of the grandest shrines in Japan, dedicated to Hachiman-jin, the god of war. OSCAR BOYD

On the outskirts of the city of Beppu are hot-spring baths that are unmanned, unvisited and free: Beppu’s secret onsen. The easiest to find is Nabeyama no Yu, though it is not a trip for the fainthearted.

Once popular with locals, the onsen was “closed” after a murder took place in the vicinity (the killer was apprehended). As such, the road leading to it is plastered with signs saying not to visit alone.

To reach the onsen, take the road toward Ebisu Shrine (Tsurumi, Beppu), but take the right fork into the mountains about 500 meters before reaching the shrine. After the fork, follow the road to the second gate and then walk about 200 meters farther up the path to reach the twin baths. The milky blue waters, straight out of the ground, are incredibly hot, so be sure to top up from the cold water pipe before you jump in. A bit of an ordeal to get to, there’s no onsen quite like it. 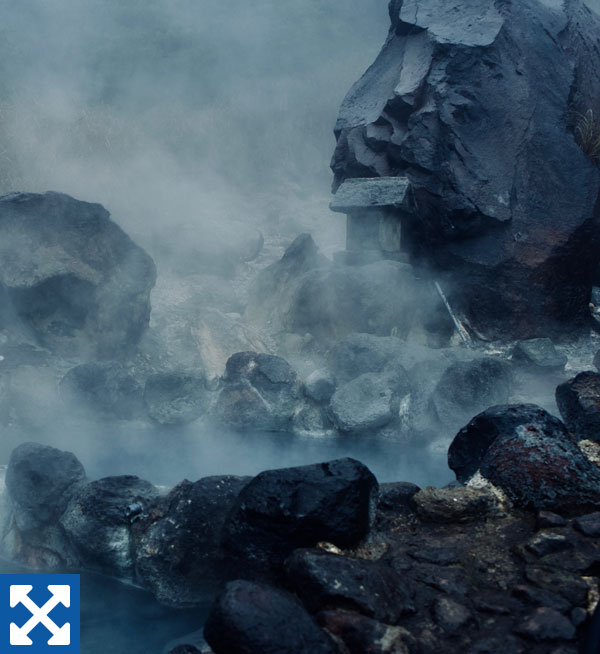 Hidden hot spring: Nabeyama no Yu, a secret onsen in the hills above Beppu, is an ordeal to get to, but a bath like no other. OSCAR BOYD

Beppu has the largest discharge of onsen water of anywhere in Japan and, as a result, has myriad hot springs, from those you can bathe in, to the seven legendary (yet somehow underwhelming) “hells” of Beppu — if you are to go to one, it should be the blood-red pond of Chinoike Jigoku (Noda 778, Beppu; ¥400).

In terms of bathing opportunities, two onsen stand out from the pack, and both for the same reason: their sand baths.

Takegawara Onsen (Motomachi 16-23, Beppu; ¥1,030) is a large wooden hall near the coast, where you can pay to be buried in warm sand. Don a yukata robe (provided) and step into the bathing hall, where you’ll see what look like shallow graves dug for you to lie in. Standing guard over the pits are a few burly looking women with shovels, who’ll promptly bury you beneath a foot or so of the warm sand. Perhaps contrary to the description, the sand baths are extremely relaxing and the uniform weight of the sand gives the impression of existing upon a planet with slightly higher gravity.

A similar fate awaits at the Shoningahama sand baths (Shoningahamacho 9, Beppu; ¥1,030), but this time on Beppu’s last remaining stretch of natural beach, with a sea view overlooking Beppu Bay. 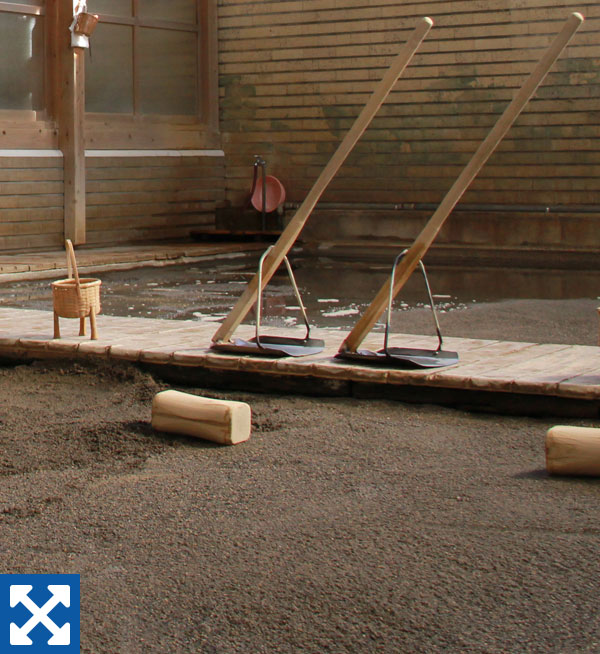 One foot under: At the sand baths of Takegawara Onsen, you can be buried in hot sand, a surprisingly relaxing experience. Beppu City. BEPPU CITY

Another use of Beppu’s abundance of steam is for cooking. At Jigoku Mushi Kobo Kanawa (literally “Hell Steaming Trivet Workshop”; Furomoto 5, Beppu), you can order baskets of food — from whole sea bream to eggs — and then cook them in deep vats of steam.

The staff at the restaurant will walk you through the process and then give you a timer so that you know when your food is cooked. It’s BYO drinks with a corkage charge, and the picnic benches and outdoor seating make it an ideal venue for a larger group meal. Queues can get long, however.

Kobo Kanawa isn’t the only evidence of steam cooking around the town; many of the onsen have onsen tamago (boiled eggs) and steamed custard puddings for sale.

On the drive between Beppu and Oita, stop off at the Umitamago Aquarium (Kanzaki-uto 3078-22, Oita; ¥2,200) to see local marine life from around Kyushu. The aquarium has Japan’s largest indoor tank, filled with hundreds of different species of fish. Its jellyfish are a sight to behold, lit in a way to augment the creatures’ spectral appearance.

Across the road from Umitamago is the Takasakiyama Monkey Park (Kanzaki 3098-1, Oita; ¥510). Take the (slow) monorail or walk up to the park, which is home to 1,500 Japanese macaques. The monkeys are wild, but come to the park for feeding once in the morning and once in the afternoon. It’s said to be lucky if one of the monkeys runs between your legs. 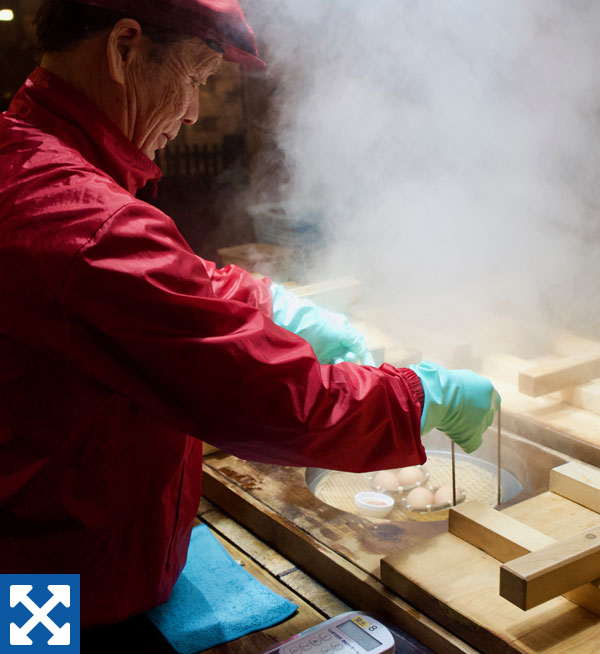 The open structure of the Oita Prefectural Art Museum (OPAM; Kotobukimachi 2-1, Oita; ¥300) was designed by architect Shigeru Ban and is one of the city’s few iconic pieces of architecture. The museum hosts a permanent collection of paintings from numerous local artists, ranging from classical Japanese landscape paintings from the Edo Period (1603-1868) to modern Japanese and Western-inspired paintings. Special exhibitions change roughly every three months.

Not far from OPAM, next to the ruins of the city of Oita’s Funai Castle, is the stylish cafe-restaurant Hosun (Niagemachi 6-16, Oita). With an outdoor terrace that looks across to the castle, take a moment to enjoy the city with a warm drink or snack.

Drink, eat and be merry — dinner

Oita is home to several specialties that the local government is trying to group together under the collective term Bungo ryōri. These include toriten (tempura chicken) and sekisaba and sekiaji (mackerel and horse mackerel, from the Saganoseki area of Oita Prefecture, delicious!). Local izakaya taverns serve up these dishes in abundance, and one of the best of these is Kamifusen Chuomachi (Chuomachi 2-15, Oita), located on the edge of Oita’s central shopping street. The atmospheric restaurant, open till late, is a great place to eat and drink your way through a menu of local delicacies.

Bounty of the sea: The Umitamago Aquarium has Japan's largest fish tank, filled with species from off the Kyushu coast. OSCAR BOYD

A 45-minute drive to the south of the city of Oita is the small farming village of Usuki. This unlikely corner of the world is home to the Usuki Stone Buddhas (Fukata 804-1, Usuki; ¥540), which are thought to be the oldest existing stone sculptures in Japan, carved sometime in the late Heian Period (794-1185) or early Kamakura Period (1185-1333).

The statues have been collectively designated a National Treasure, and are grouped in four main collections. Though the man-made structures around the statues somewhat detract from their otherwise solemn and mystical prescences, they are a fascinating piece of ancient Japanese history.

Farther south of Usuki is the Furen Limestone Cave (Notsumachitomari 1632, Usuki; ¥1,000), a 500-meter tunnel into the heart of the mountain. The cave seems seldom visited — on this research trip, I was the first customer of the day at 11 a.m., two hours past opening — and this is undoubtedly a good thing as it is a wonder to explore the caves in a small group. Initially unimpressive, the cave opens up into several chambers that become increasingly magnificent: The largest stalagmite stands 10 meters tall and is 16 meters in circumference.

This is the fifth installment of a monthly series that will introduce each of the 12 host cities of the 2019 Rugby World Cup. 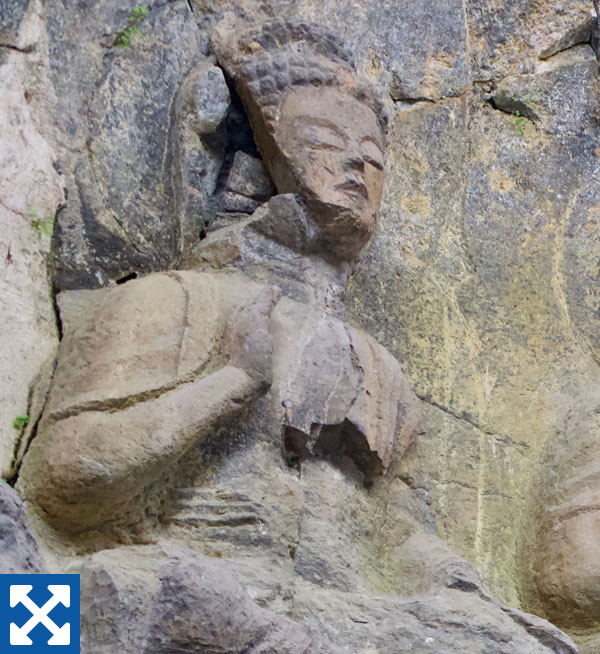 Oita will host three games for the 2019 Rugby World Cup in the 40,000-capacity Oita Stadium (Yokoo 1351, Oita, Oita Prefecture 870-0126). By public transport, catch the bus from stop No. 3 at Oita Station bound for Park Place and alight at Oita Sports Park Higashi.

The journey takes approximately 45 minutes, after which you must walk about five minutes to the stadium. Alternatively, from bus stop No. 6 at Oita Station, catch the bus bound for Park Place. Alight at Oita Sports Park Higashi and walk five minutes.

The city of Oita can be accessed via Oita Airport, which is located on the Kunisaki Peninsula, a 70-minute drive away. Oita and Beppu can also be easily accessed by train from Fukuoka or Kitakyushu in the north of Kyushu, or from Kumamoto in the west.

Though there is public transport throughout Oita — particularly in Beppu and Oita — to see the full extent of the prefecture it is best to rent a car. Numerous car rental services are available from Oita Airport, or from car rental agencies located in the cities of Oita or Beppu.

Oita’s landmark hotel is the Hotel Nikko Oita Oasis Tower (Takasagomachi 2-48, Oita; rooms from around ¥9,000), which is located in the center of the city, and within walking distance of both the Oita Prefectural Art Museum and the city’s central shopping arcade.

For a more budget experience, Beppu’s Asami Guesthouse Tabimakura (Hamawaki 3-9-32, Beppu; rooms from ¥3,500) also offers tatami rooms with futons, at a fraction of the price of a fully fledged ryokan.

Map: A weekend in Oita