A weekend in Kumamoto

In the land of the smoking volcano

Kumamoto has a bittersweet relationship with its geology

Since 2016, Kumamoto has been associated more with the earthquake and aftershocks that damaged much of the city and prefecture than as a travel destination. Though reconstruction is complete in most areas, there is still evidence of damage, most notably to Kumamoto Castle, a prefectural icon whose walls and main keep are still undergoing extensive repairs.

As far as cities go, Kumamoto is nothing extraordinary, though there is plenty still worth visiting. The surrounding countryside, however, is magnificent. The eastern part of the prefecture is dominated by Mount Aso, Japan’s largest active volcano, and is home to numerous onsen (hot-spring baths). To the west is the coast, with views across the Ariake Sea toward Nagasaki Prefecture and the fearsome Mount Unzen, another of the region’s active volcanoes.

Kumamoto Prefecture is large and much of it is difficult to access by public transport. Though most of the locations in this article can, eventually, be reached by a combination of trains and buses, the itinerary is best followed by car, starting from the cities of Fukuoka, Oita or Kumamoto.

Out on the soba road — lunch

Twenty minutes outside of Kurokawa Onsen is the Soba Kaido road, nicknamed for the noodle shops positioned every 100 meters or so along its course. Kagoan (Akababa 2862-3, Minamioguni, Aso) is a 100-year-old farmhouse that has been refurbished as a soba restaurant; its mossy roof and thick wooden beams hint at its age. The noodles, when they come, are sublime: The earthy taste of buckwheat defines each mouthful, complemented by a rich soy-based soup and a generous side of maitake mushrooms, lightly fried in a crisp batter. 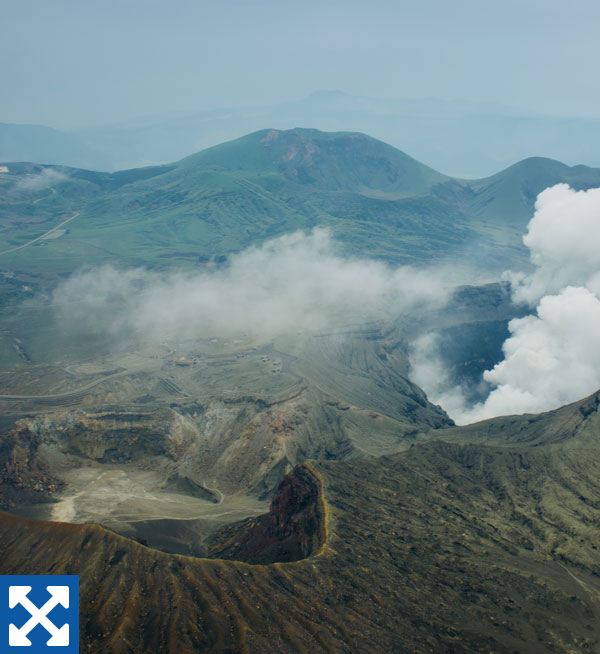 Let out your inner nudist — afternoon

Twenty-nine ryokan inns line the Kuro River to make up the bulk of Kurokawa Onsen (Manganji 6594-3, Minamioguni, Aso). Though it has its roots in the Edo Period (1603-1868) as a rest stop for daimyo, it was not until the 1960s that the village became well-known to the public.

Despite recent growth, the town maintains a charm that effuses throughout the buildings and narrow alleyways that run down the steep banks to the river. It feels old, and has escaped much of the over-enthusiastic concrete landscaping that is present elsewhere in Japan. From the town’s information center you can buy nyūtō tegata, onsen-hopping passes that allow the wearer access to three different outdoor baths at any of the 24 participating ryokan for just ¥1,300.

Choux cream pastries are the raison d’etre at Patisserie Roku (Manganji 6610, Minamioguni, Aso), a cornershop bakery at the center of Kurokawa Onsen. Each cream puff is baked in-house and then filled with sweet cream-custard to order. Potted caramel puddings and roll cakes are also made in-house using milk from Jersey cows reared in the prefecture’s Aso region.

Wine and dine at a ryokan — evening

As a rule of thumb, the further downstream you are in Kurokawa Onsen, the nicer the facilities. Ryokan Sanga (Manganji 6961-1, Minamioguni, Aso), which is a short drive out of the main town, is the finest of all, with sublime outdoor baths surrounded by lush forest. It serves an excellent kaiseki (traditional Japanese multicourse) dinner at tables secreted away in the wooden alcoves of its dining hall. Enjoy the meal and excellent selection of local drinks before turning in for an exceptionally peaceful night’s sleep. 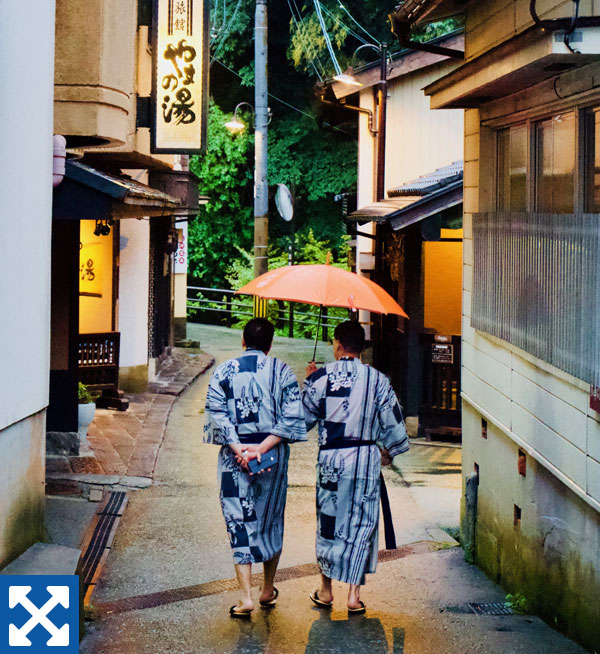 Bathe in style: Kurokawa Onsen is full of ryokan inns with hot-spring baths, but Ryokan Sanga is among the finest.

Take a drive through Aso — morning

Located in the middle of Kyushu is Mount Aso, the country’s largest active volcano. The mountain’s five peaks are situated in the middle of the Aso caldera, which formed through a series of eruptions between 90,000 and 270,000 years ago and is so large that almost 50,000 people live inside it.

The caldera’s rim has some of the best roads in the country, winding up and over the mountains through grassland and thick pine forests. If it’s a clear day, stop off at the Daikanbo Lookout (Yamada 2090-8, Aso, Kumamoto) on the northern edge of the caldera for views into the interior and toward the town of Aso. The gift shop here sells all sorts of Kumamoto-themed goods — including Kumamon (Kumamoto Prefecture’s cuddly bear mascot) underwear — and local produce from around Aso.

And then fly over it — afternoon

If you want to get up and personal with the volcano, drive past the Aso Volcano Museum (Akamizu 1930-1, Aso) — it’s well-worth stopping here on the way back to see the interactive displays of Aso’s history — toward the Mount Aso Ropeway. Before you reach the ropeway, you’ll see a car park on the left hand side of the road where you can book a helicopter tour over the smouldering crater of Mount Naka, one of Aso’s five peaks.

The tours, which run during daylight hours, are about as casual as they come — you can’t book in advance, there are no waivers or disclaimers to sign, just two men in a carpark wearing wellies and happily throwing you on the next available ride. Tours last just five minutes and cost ¥5,000, but are well worth it. 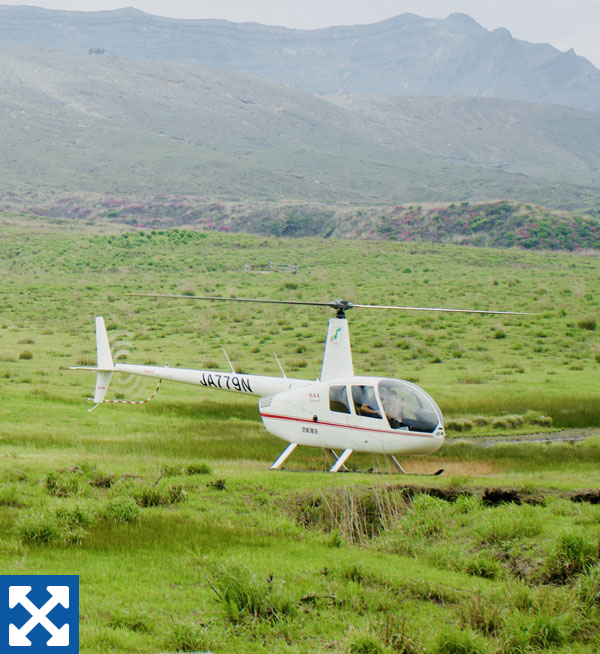 Up with the birds: For ¥5,000 you can partake in a helicopter tour of Mount Aso's Nakadake crater. OSCAR BOYD

To try some of the local specialities visit Yokobachi (Kamitoricho 11-40, Chuo-ku). A house favorite is the knock-your-head-off spicy karashi renkon (mustard-filled lotus root), served as a side to basashi (horse sashimi).

If you’re peckish late at night, visit Tengaiten (Anseimachi, 2-15, Chuo-ku), a favorite local ramen shop that serves up the Kumamoto variant of tonkotsu ramen, heavy on the garlic with excellent chāshū pork. Order the chāshū-men bowl for an extra helping of the pork.

Over the past five years, Kumamoto’s craft beer scene has grown rapidly. Located in the basement of the riverside River Port 9 building is Voyager (River Port 9 B1, Kuhonji 1-1-26, Chuo-ku), owned by DJ and craft beer specialist Miki Tashima and styled as a craft beer and books bar. The intimate space is friendly, with a wide selection of beers from Kumamoto, Japanese and overseas brewers.

If you’d like to try one of the harder local tipples, head to Glocal Bar Vibes (Shimotori 1-5-6, Chuo-ku), a shōchū specialist. Owner Noriyuki Yamashita keeps conversation among his guests flowing in both Japanese and English and has an excellent nose for picking out a drink to suit your tastes. 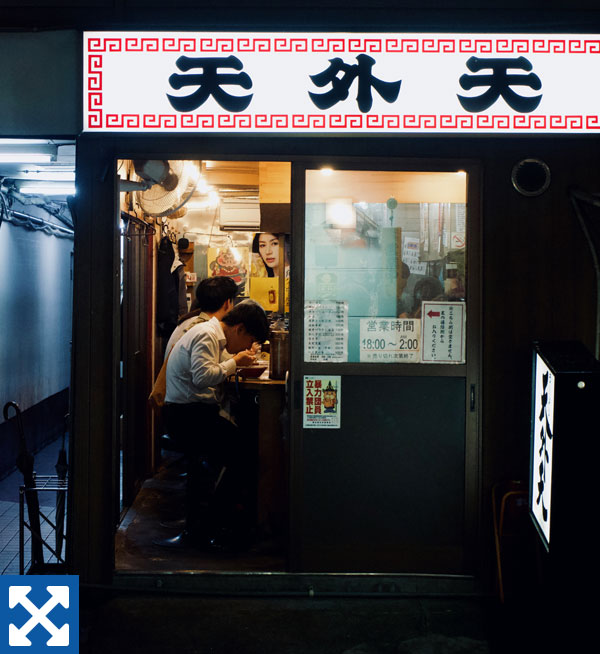 Heavy on the garlic: Tengaiten serves one of the citiy's finest bowls of Kumamoto-style tonkotsu ramen, infused with copious amounts of garlic and served with excellent chāshū pork. OSCAR BOYD

I spy, with my miniaturized eye: Built in the 17th century, Suizenji Jojuen park reproduces the 53 posts of the Tokaido road and even has a replica Mount Fuji. OSCAR BOYD

Chief among Kumamoto’s attractions is Kumamoto Castle (Honmaru 1-1, Chuo-ku), which stands alongside the UNESCO heritage Himeji Castle as one of the finest castles in Japan. Situated on a fortified hill to the northwest of the Shirakawa River, the main keep of the castle is both elegant and imposing, and dominates much of the city’s skyline. Both the keep and the walls were badly damaged in the 2016 earthquakes and a full restoration is not expected to take place until the 2030s, meaning the keep is currently off-limits. However, much of the grounds can still be explored and a good view of the keep can be had from Kato Shrine.

Also within the grounds is the Kumamoto Prefectural Museum of Art (Ninomaru 2, Chuo-ku), housed in a redbrick building and surrounded by camphor trees. The permanent collection focuses on art from Kumamoto Prefecture and some of its more notable artists, including Yukio Fukuzawa and Tadayoshi Nakabayashi, but also contains works by Renoir and Rodin. Since the earthquake, the museum has had a room dedicated to the castle, displaying artefacts that once belonged to the now inaccessible keep.

Suizenji Jojuen park (Suizenji Koen 8-1, Chuo-ku) was built by the Hosokawa family in the 17th century to reproduce in miniature the 53 posts of the Tokaido road that connected Edo (now Tokyo) to Kyoto in the Edo Period; it even has a grassy replica of Mount Fuji. In Vegas, it might be considered tacky, but here the garden is expertly curated and maintained. Stop for green tea and wagashi sweets at the lakeside teahouse.

To the west of the city is Mount Kinbo, which offers views over the city. Drive around and over the other side to Unganzenji temple (Matsuomachi Hirayama 589, Nishi-ku), where celebrated swordsman Miyamoto Musashi (1584-1645) spent his final years writing and meditating in Reigando Cave.

Pay the ¥200 entrance fee and walk through the old turnstile to see one of Musashi’s blades, and then on past a rocky slope dotted with the weathered remains of stone statues known as rakan. The cave is at the end of the path, a large open space with a small shrine and large central rock, on top of which Musashi is supposed to have meditated. 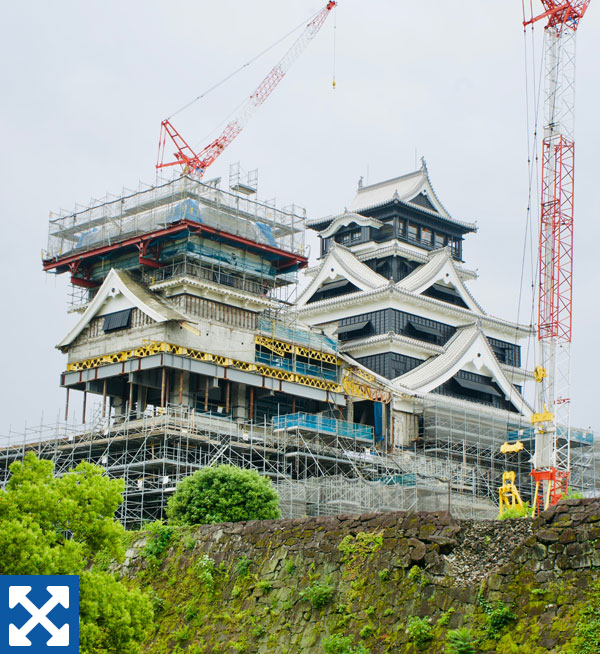 On the mend: The main keep of Kumamoto Castle is currently being restored in the wake of a series of earthquakes and aftershocks in 2016. OSCAR BOYD

Before departing, follow the road out of the temple to Kokopelli (Matsuomachi Hirayama 592, Nishi-ku), an old farmhouse that has been restyled as a cafe and souvenir shop with outdoor seating that looks down to the valley below. The coffee and cakes are worth savoring, as is the view of Kumamoto Prefecture.

This is the 10th installment of “A weekend in…”, a monthly series introducing each of the 12 host cities of the 2019 Rugby World Cup.

The stadium is a 50-minute bus ride from Kumamoto Station to Park Dome Kumamoto-mae bus stop, and then a short walk from there. Parking is available on-site at the stadium.

By air, Kumamoto is served by Aso Kumamoto Airport. The city is connected to Hakata Station in Fukuoka by shinkansen, which is in turn connected to Tokyo and other major cities.

The city has good public transport, with a central tram network and buses beyond that. A one-day pass for unlimited use of trams and city buses in central Kumamoto is available for ¥700-¥2,000 depending on the area covered, while a one-day pass for just the trams costs ¥500. The center of the city is compact and easily walkable.

Local buses and trains run throughout the prefecture, but the best way to get around outside of the city is by car.

In Kurokawa Onsen, stay at one of the ryokan inns. If your budget stretches that far and you book well in advance, Ryokan Sanga (Manganji 6961-1, Minamioguni, Aso) trumps all. However, most of the other accommodations in town are also excellent and considerably less expensive.

In Kumamoto, consider Kumamoto Hotel Castle (Jotomachi 4-2, Chuo-ku) for accommodation that overlooks the castle and is central to most of the city’s attractions and good restaurants. 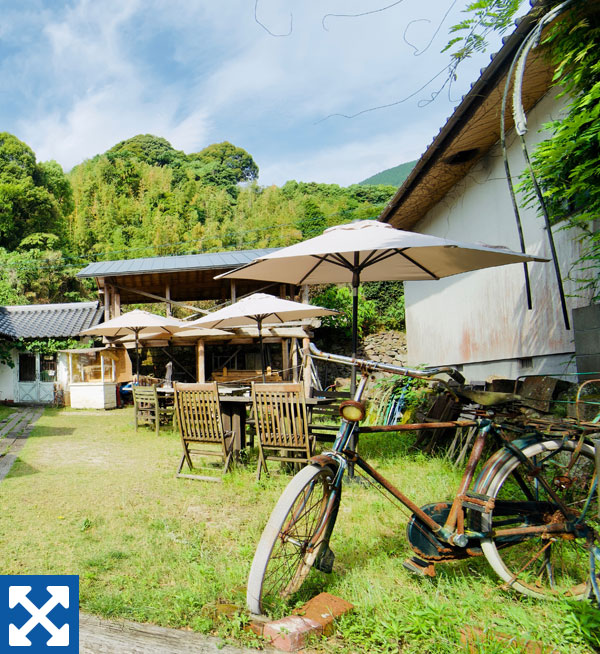 Coffee and contemplation: Kokopelli cafe occupies an old farmhouse, just down the road from Unganzenji temple, where swordsman Miyamoto Musashi spent his final days in a sacred cave. OSCAR BOYD

Map: A weekend in Kumamoto